"Thank you, baby! Leave it to me. I'll slaughter anyone that gets in my way!"
―Dagargin's first words[src]

"What is this power?! It can't be! Unbelievable!"
―Dagargin's final words before his initial demise.[src]

The strongest Wicked Dragon Ryuuwon has created by making his whole Jaryuu horde (about 3000) kill each other, making it also the last of the Wicked Dragons. He overuses the word "baby." His mission is to aid Ryuuwon in finding "The Three Headed Dragon of Darkness", a precious that gives the one it chooses, great power.

Dargagin knows this weak point of his and knew when the Boukengers tried to use it, they were delivering weak attacks on purpose so the counter could be re-countered when wearing the Accel Tector, but he revealed that his weakness wasn't as easy to exploit as they expected (Masumi failed to do so and Satoru was nearly killed before succeeding). Dargargin was defeated by the Golden Slash at first but he enlarges himself, he is later destroyed by SirenBuilder Crane and Great Sword Man Zubaan. 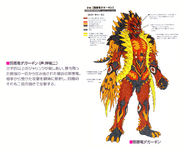