He is the final threat of that series.

Overseeing the destruction of the three Braneworlds by Cleaning Minister Kireizky, Yogoshimacritein uses his fallen minion's Infinite Wastebin to enter the Human World, using it as a means to feed from in order for him to use his signature attack Justice Dissolution (正義解散, Seigi Kaisan), which can vaporize those it hits, altering his victim's bodies to a different wavelength that sends them to a subspace reality on Earth. He uses it to take out Hant Jou, Gunpei Ishihara, and the Go-On Wings, along with their Engine partners, Engine Carrigator, Engine Jum-bowhale, and the ancient Engines.

Yogoshimacritein is one of the most ruthless members of the Gaiark, easily using both Water Pollution Minister Kegalesia and Air Pollution Minister Kitaneidas as human shields, when needed. After losing the Infinite Wastebin to the ministers, Yogoshimacritein fatally damages them both before making his way to the Deus Haguruma Magear to power himself up until he is trapped in the Bikkurium chamber by Renn and Saki Rouyama as the gear is destroyed by Sosuke Esumi and the Kankan Mantan Gun (by using the Engine souls of their primary partners in place of the Ancient Engines' for the weapon), causing the entire Hellgaille Palace to collapse around him and for the effects of the Justice Dissolution to be canceled. However, Yogoshimacritein reconstructs himself from his gears and attempts to destroy the city until he is halted by Hanto, Gunpei, and the Go-On Wings.

Once the primary Go-Ongers join the fray, and he is blasted with the Super Highway Buster, and both of the Wing Boosters (with the Go-on Wings using Bus-on and Bearrv's Engine Souls in place of their primary partners for the attack), Yogoshimacritein enlarges himself in a process called Third Industrial Revolution (第三次産業革命, Daisanji Sangyō Kakumei) and battles Engine-O G12 after the other Engines arrive. Though he is able survive the G12 Grand Prix attack by reconstructing his body again after it is broken apart by the impact, Yogoshimacritein is finally destroyed by the more advanced G12 Final Grand Prix attack.

He is revived as a member of the Black Cross Army and takes on the title Crime Minister Yogoshimacritein of the Black Cross (黒十字の総裏大臣ヨゴシマクリタイン, Kuro Jūji no Sōridaijin Yogoshimakuritain) during the events of Gokaiger Goseiger Super Sentai 199 Hero Great Battle. He fights against Gokai Yellow, Gokai Blue, Gosei Black and Gosei Yellow but he's defeated by their combined powers. Later, he's resurrected by Black Cross King in the giant battle and he summons the phantoms of Gaiark members Chirakasonne and Kireizky. He is destroyed by Engine-O, Dairen'Oh, and RV Robo.

He is revived again as a member of the Dai-Zangyack. When the Go-Ongers are fighting with Kamen Rider Kiva, Yogoshimacritein was barely seen during the Rider Kick.

Yogoshimacritein is considered the crulest and most evil of the Gaiark in the series, likely only surpassed by the Pollution Presidents (Who only appear after the series was over). He is even more serious than his son Yogostein. Unlike Yogostein who treats his subordinates and comrades rather well (and also mourned over the death of Land Pollution Vice-Minister Hiramechimedes), Yogoshimacritein cares nothing about his others than as pawns, having several times used the other two Pollution Ministers as living shields to save his own hide.

While at first he seemed to want to avenge the death of Yogostein, it becomes clearer as he oversees the attacks on the Human World that he only wants to succeed his son's failure, not out of any concern for his well-being. He would later deem him as a useless failure, implying an abusive relationship towards him. He is also willing to have any Braneworlds completely destroyed just to rule the rest in a dictatorship.

As a Black Cross member, he is inexplicably more comical, making a movie out of defeating both the Goseigers and Gokaigers and is distracted by both their Sentai Yellows asking for his autograph. 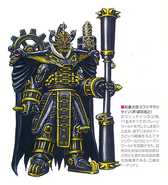