Crescent Moon Mask's scheme involved the creation of a town filled with people abducted by him and his minions, then injecting all those within the town with a drug that can turn people into werewolves upon his command. However, one of the subjects, Shiraishi, escaped from the town to return to his young daughter a week after he had been abducted by him. Tsuyoshi and Peggy follow him after discovering his scheme, with Akarenger being hurt while Momorenger sneaks into the town discovering the wolf-man army he was developing and the transformation of people in the town. Crescent Moon Mask and the Zolders appear to capture Peggy, but she escapes even as he threatens to turn either her or Shiraishi's daughter into another werewolf. Akarenger arrives with reinforcements as the other Gorengers take the infected onto Variblune to be treated with a cure. They attack the Masked Monster with Gorenger Storm but he survives, using the power of his staff to reform himself. At instruction, Aorenger fires a Blue Cherry at one of the crescent moons on the staff, destroying him permanently.

Unnamed motorcycle: He possesses a motorcycle that is comparable to Akarenger's Red Machine. 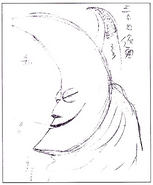