"At your service."
―Crazar's first words when introducing herself to Benglo.[src]

"No. You've got it all wrong. It's YOU who's really in danger."
―Crazar (as Vella) to Tyzonn when revealing her trick.[src]

"Are you sure this is what you want? If you destroy me, you may never find Vella!"
―Crazar after being knocked around by Tyzonn and her final words before her destruction.[src]

Crazar was a white wolf-like monster who is one of the Fearcats and the only known female member. She serves as the main antagonist of the episodes "Red Ranger Unplugged" and "Home and Away".

Many years ago, Crazar was the member of the Fearcats and they were sworn enemies of Tyzonn and his team and they also kidnapped Vella, who was presumed dead during a cave-in that they caused.

She kept the Overdrive Rangers busy while Mig and Benglo searched for the Octavian Chalice.

Tyzonn informs the team more about the cave-in that occurred many years ago. He tells them that Crazar was also there. He thought Crazar was buried inside because he didn't see her leave with Mig and Cheetar. His girlfriend, Vella, was lost in the cave-in. They were going to get married.

The Red Sentinel Ranger and Mercury Ranger take down Crazar. Crazar then makes herself grow so the Sentinel Knight changes back into Sentinel mode and takes her on only to be overwhelmed. Luckily, the Drivemax Megazord took her out although she quickly overwhelmed it and they were forced to form the new DualDrive Megazord. Crazar is disintegrated by the DualDrive Megazord's finisher and an old Mercurian battle spell.

Crazar was not finished, causing Tyzonn to be knocked unconscious. Tyzonn awakes on his home planet, Mercuria, with his girlfriend, Vella, looking over him. Vella tells Tyzonn that he never left Mercuria. Vella tells Tyzonn that his whole experience on Earth never happened and it's only been three days since the cave-in. Vella says to him that he rushed back in to save her but she escaped, and he was the one who got trapped inside by the Fearcats.

Tyzonn hears a beeping sound near by, then Vella drops something...It's Tyzonn's Morpher. Vella then reveals her true form, Crazar in disguise. Crazar informs Tyzonn that she had replicated Vella after the cave-in. Tyzonn then learns that Vella is still alive and Crazar is keeping her somewhere.

Tyzonn battles Crazar and learns that he is still on Earth. He kicks into Overdrive and destroys Crazar for good with his Drive Detector slash wave finisher.

Of the Fearcats, Crazar is more violent, cold, and far more ruthless. According to Tyzonn, Crazar is said to be even worst then Mig and Benglo combined. She is also manipulative and highly arrogant, thinking that she is better then the Rangers. Additionally, she is shown to be crazy, hence her name, as seen when she cackles evilly. 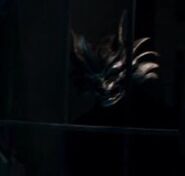 An alien with the head of Crazar as seen in "Rise of a Ranger".

An audience member with the head of Crazar and the body of Benglo's second form as seen in the front row of "Galaxy Warriors" in Power Rangers Ninja Steel.