Lord Zedd had used Finster's vehicular transformer apparatus on the cab that Bulk, Skull, and Kimberly were riding in, transforming it into Crabby Cabbie. The Shogun Megazord destroyed it. 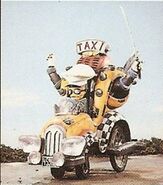 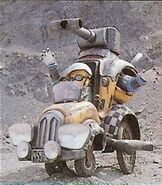 What it look like before transformed by Lord Zedd.