Scroll 39: The Seventh Spear and the The Mysterious Stone
Scroll 40: The Decoy and Ninja Law

Sargain's most powerful Chunin, moth-themed and able to release a corrosive powder from his wing scales. Due to his reforming ability upon being destroyed, all fatal attacks only increase the spread of his powder. The Rangers soon moved the fight to a mountainside where no one would be harmed. But once Shurikenger managed to nearly damage Fusyokuruga's regeneration device, Sargain orders him leave the fight. Fusoyukuruga later resumed his attack, with the Rangers giving a protective antiseptic by Gozen to counter Fusoyukuruga's scales, but the spray has a freezing effect when the ninjas applied it on themselves. Shurikenger, who didn't put the powder on, saved them and managed to break Fusyokuruga's regeneration device so the Victory Gadget could blast him to bits as his victims returned to normal. Fusyokuruga was then rebuilt as a giant and killed by Revolver Gourai Senpuujin. 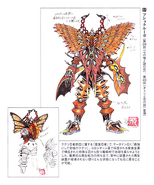