"And you're the one who's gonna pay!"
―Conwing after enlarging himself[src]

Conwing is a odd squid-themed mutant who can copy the voices of other people using a device in his mask He is the main antagonist of the episode Quantum Secrets.

Like all other mutants, Conwing was created in the result of a science accident. Before the events of the season, he was captured by Time Force and frozen. In the 21st Century, he was released by Ransik to capture the Quantasaurus Rex. Conwing was a unique mutant who could copy other people's voices. When Nadira didn't believe him, Conwing copied Nadira's voice to answer. After leaving and kidnapping Eric, he took his Morpher and forced him to summon the Quantasaurus Rex. Conwing, copying Eric's voice, ordered the Quantasaurus Rex to destroy Silver Hills before throwing Eric into the river to die. However, the other Rangers came, rescued Eric and formed the Shadow Force Megazord to fight the Q-Rex. When Eric returned, he finally recovered his Morpher, prompting Conwing to enlarge himself. However, Eric activated his Mega Battle Armor and managed to defeat and freeze Conwing in his giant form. 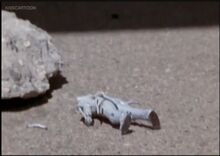 Conwing is cunning, arrogant, stubborn, selfish and devious. As many other Mutants, he likes to play with the Rangers in the battle, but he also can do it seriously. He is intelligent, power-hungry, manipulative, menacing and psychopathic. He shows a great confidence, as he mocked at Eric and thought the Quantum Ranger can defeat him. This caused his defeat in the battle.

Retrieved from "https://powerrangers.fandom.com/wiki/Conwing?oldid=1050390"
Community content is available under CC-BY-SA unless otherwise noted.