Conner McKnight is the Red Dino Ranger and leader of the Dino Rangers.

Retroactively, he is also referred to as the Dino Thunder Red Ranger or Red Dino Thunder Ranger though these are in reference to the show, as opposed to proper labels. Conner has an identical twin brother named Eric McKnight (also played by James Napier) who was once a student at the Wind Ninja Academy, but later flunked out.

Conner was a soccer player at Reefside High School. He also played on a local club team. He found the Red Dino Gem when he was in detention along with Kira Ford and Ethan James. Their science teacher, Tommy Oliver, told them that if they found anything prehistoric, he would cancel detention for the rest of the week. Conner picked up the Red Dino Gem while Kira and Ethan picked up the Yellow and Blue ones respectively. The Red Dino Gem bonded with Conner's DNA, giving him the ability of super-speed.

After this, Kira was kidnapped by Mesogog, which forced Conner and Ethan to tell Tommy that they had taken the Dino Gems. Kira escaped from Mesogog's lab and met up with Conner, Ethan, and Tommy. Later, the Dinozords were wreaking havoc on the city. Tommy gave the Red Dino Morpher to Conner, while he gave the Yellow and Blue morphers to Kira and Ethan. Conner became the Red Dino Ranger and tamed the Tyrannozord. As the Red Ranger, he controlled the Tyrannozord, as well as wielding the Tyrannostaff and Thundermax Saber in combat.

After Tommy had been kidnapped by Mesogog, Conner, Kira, and Ethan learned of the previous Rangers history, as well as Hayley helping Tommy in the creation of the Dino Morphers. Hayley then revealed the Raptor Cycles to the Rangers, as they would have to reach 526 miles per hour to reach the invisiportal without being destroyed. The Rangers rescued Tommy, who, in the process, made off with a mysterious power source. The rock was revealed to encase the Black Dino Gem which Tommy used to become the Black Dino Ranger. This awakened the Brachiozord, as well as the Cephalazord.

Next Level of Power

Conner was the first Dino Ranger to activate the Super Dino Mode enhancements on his suit during a fierce battle with the then-evil White Dino Ranger. It was Conner's sheer determination to win against the White Ranger that made him able to unlock the Super Dino Mode. When he first unlocked it, he could only use it for a short amount of time, but as he grew stronger as a Ranger, his abilities with that enhancement increased and limitations decreased.

In Leader of the Whack, a strange meteor crashed on Earth. The meteor had the power to unleash a person's reprised personality side. For Conner, it was a side of intelligence.

In Lost & Found in Translation, Conner and Kira find Ethan watching TV late at night in the Cyberspace Cafe and come across a Japanese show about their exploits. While Kira and Ethan are excited by Japan's portrayal of the Power Rangers, Conner is disgusted. Later though, he warms up to it. He also used the theme for his class paper as he said he compared the way they see us to the way we see ourselves.

Due to a brutal defeat from the Terrorsaurus and the White Dino Ranger Clone, Tommy and Trent began to unleash the Shield of Triumph which was hidden in a waterfall. Conner kept feeling a calling from the shield. Conner showed up just in time to claim the Shield of Triumph. For the Shield to assume full power, each Dino Ranger had to contribute a part of themselves. After Trent made his contribution to the shield, Tommy then made his, followed by Kira and Ethan (who would sometimes have to keep contributing their power to Conner,) Conner then used it to become the Triassic Ranger. After morphing, this shield acts as the Triassic Ranger's weapon and gives him the ability to travel into another dimension known as the "The Triassic Dimension". After Conner gained his Triassic powers, Hayley discovered the Mezodon Dinozord and then created the Triassic Megarover. The Mezodon pulls the Triassic Megarover as its chariot. Together, they are called Mezodon Rover. The two can also combine to create the Mezodon Megazord.

After meeting his love interest Krista, Conner was able to unlock the final stage of his Dino Powers. Conner begins to doubt his dedication when Krista is willing to do whatever it takes to fight for her cause. Krista was kidnapped by Zeltrax and her life was in danger. Conner remembered a speech from Tommy about passion. After unleashing Super Dino Mode and morphing into the Triassic Ranger on his own, he unlocked the Battlizer and became the Battlized Triassic Ranger. The Battlized Mode gives Conner super-stretch arms and legs, a small Mezodon-faced shield, another shield-like armor piece for his opposite arm which looks like a tail, lightning fast agility, a dragon yo-yo attack, and shoulder cannons which can fire massive amounts of energy at his enemies, often destroying them. He defeated Zeltrax, sending the villain into hiding.

The Last Day of the Dino

In the episode Thunder Struck, Part 2, Conner, like his fellow Rangers, sacrificed his Dino Gem powers to save the Earth from the Mesomonster. After this, he lost all of his powers except his T-Rex Speed abilities, which were bonded with his DNA.

At the end of Dino Thunder, Conner finally hooks up with Krista and takes her to the High School prom. He later goes on to start his own soccer camp. In 20 years, he will have become famous for his soccer camps all over the country.

Conner along with Ethan and Kira are pulled from their 1 year high school reunion and transported into the future by Troobian mercenary Broodwing, who wants them to join forces with him. They meet the Space Patrol Delta Rangers, and Conner gets interested in the S.P.D Pink Ranger Sydney Drew, though she declines stating she doesn't date older guys. And later the Dino Rangers watch as they go into battle with the Troobian Empire. Not wanting to stand around and do nothing, Kat Manx regenerates Conner's Dino Morpher from the archives and he becomes the Red Dino Ranger again, helping the S.P.D. Ranger fight Gruumm's forces and then going back to his own time with his memories erased. Later (or earlier, to the Dino Rangers, right after Conner gained his Triassic powers and before Zeltrax disappeared again during the course of the Dino Thunder series), S.P.D. came back in time to 2004, following Gruumm who decided to destroy Earth there. The Dino Rangers teamed up with S.P.D. to defeat Zeltrax and Mora's monsters while Conner again teamed up with Jack. The Dino Rangers and S.P.D. Rangers memories of their time together were later erased.

Conner returned with his fellow Dino Rangers, while Dr. O fought with his old team as the Green Mighty Morphin Power Ranger, as part of the army of Legendary Rangers that helped the Mega Rangers defeat the Armada once and for all, fighting in a huge battle against hundreds of X Borgs and dozens of Bruisers.

Conner was one of the Rangers that responded to Jason's signal and returned alongside his fellow Dino Rangers as part of the Legendary Dino Rangers army, fighting side by side with the other Red Dino Rangers and defeating Snide. When Evox summoned his massive Chimerazord, Conner joined in summoning the Thundersaurus Megazord and aiding in its defeat. With Evox on the run again, the teams departed, with Conner and the rest of his team being happy to return to Reefside.

When events set into motion by Lord Drakkon caused the timeline to split into a pocket universe, each anchored on a powerset, the Dino Rangers were split off into their own pocket universe. Lord Drakkon then attacked them. He was initially captured by Lord Drakkon's army and held on the moon base. At the end of the Shattered Grid event, he was rescued from the base by a team of Rangers led by Grace Sterling.

He boarded Promethea with the other rescued Rangers and, when the universe was restructured at the end of the arc, he was left among those trapped in a different dimension, until the Promethea Rangers found their way. Conner is seen in Terona's laboratory, explaining to Terona Washington that he could now fend for himself.

Conner's helmet and the other several Ranger helmets are seen in Jason Lee Scott's flashback and vision to the battle on the Moon of Shattered Grid, his helmet is seen between the battle with Jason vs Drakkon.

Conner along the other Dino Rangers are among all the Ranger teams which appear in the Korean-developed mobile game Power Rangers Dash.

The Red Dino Ranger is among the Rangers who feature in Power Rangers Legacy Wars,he is a Epic (Leader), Epic (Assist) character, and represents Dino Rangers alongside Kira,Trent and Tommy Oliver.

Conner is not the smartest Ranger on his team, actually, he's constantly labeled a 'dumb jock' by his fellow Ranger, Ethan James, with whom he shared a mild rivalry earlier on in the season. At first, he seems to fit the stereotype as he comes off as arrogant and self-centered. However, he is actually a very well-meaning and honest person who always does the right thing in the end despite his faults. Around the time his relationship with Ethan became more friendly, Trent Fernandez-Mercer gained the White Ranger powers. Conner quickly developed a very intense rivalry with Trent. At first, the two were on opposing sides and engaged in raging fights with each other. Even after Trent joined the team, Conner was still very distrusting and uncomfortable around him until Trent saved his life in battle with a monster. Conner's main interest was playing soccer and he aspired to be a famous soccer star, this sometimes clashed with his Ranger duties but he quickly learned to put his responsibility to save people and the well being of others over his own needs.

Super Dino Mode
Super Dino Mode is an ability to the Red Dino Ranger eventually utilize. By drawing energy from his Dino Gem, they go through an almost feral transformation. His helmet roars, the patterns on his suit transform into spiked armor, and their strength increases greatly.

Triassic Ranger
The Triassic Ranger is a power-up mode used by the Red Dino Ranger, formed by the Blue and Yellow Rangers (Kira and Ethan) giving their power to him temporarily. He was eventually able to use this without borrowing other Rangers' powers. His suit color changes from red and white to red with gold, yellow, and blue accents. Gold embroider added to the helmet, Gold shoulder pads, and he also gains physical strength to throw giant-sized monsters (with one hand).

Triassic Battlizer
The Triassic Battlizer is used by the Red Dino Ranger. Conner was doubting his abilities as a Ranger until Tommy encouraged him to break free from such negative thoughts. His newly gained confidence resulted in him activating his Battlizer with only his sheer will power. Conner used the Battlizer for the last time against Mesogog in the final battle in Thunder Struck, but chronologically used it one last time in Wormhole, the suit is an armed Torso Armor w/ Mezodon bracers and shin armor, Super-stretch arms and legs.

The Red Dino Ranger Ninja Power Star is a special Ninja Power Star & is marked with the kanji for "red". Both versions of this star are exclusive to the Ninja Steel toyline, though verison 2 was ultimately never released. 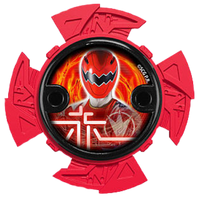 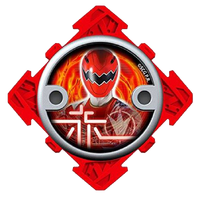