The Conenose Robot was a lobster/fiddler crab-themed robot and one of the many Zord like mechs given to members of the Troobian Empire by Broodwing.

The robot first appears fighting against the A-Squad Rangers with their Delta Squad Megazord, piloted by a Bluehead, but is quickly destroyed by the Delta Blaster.

The Conenose Robot appears again in the city when Ringbah is assigned to attack the city so the Power Rangers will be unable to stop a diamond robbery some Krybots are executing to give the Terror Spacecraft enough power to reach Earth. The Rangers deploy in their Delta Squad Megazord and badly damage the robot using its Delta Sword to strike its arm. Mora blackmails Ringbah into retreating by the threat of having his robot's power removed so he does just that.

The Conenose Robot later reappears in the city and attempts to fight the Delta Runners and does initially have the upper hand until Jack activates Formation Delta, taking the Delta Sword from Delta Runners 4 and 5, attaching the Delta Sword to his Zord. It then begins an attack run, the Conenose Robot trying and failing to destroy it with an energy blast, and hit it in the legs before slashing it across the front which destroys it. Ringbah manages to survive but is quickly brought in by Sky's Deltamax Striker. However, due to Sky and Syd leaving to get involved in the battle, the Krybots are able to steal the diamonds and Emperor Gruumm comes to Earth.

The third and final Conenose Robot is sent by Broodwing to distract the Rangers whilst Drakel attacks Baskin and steals The Evil. It rampages in the west side of New Tech City, forcing the Rangers to fight it. They form the Delta Squad Megazord and scanned it only to discover that the pilot is a Bluehead and not Drakel. In spite of this, they try to fight it with the Delta Sword but the Robot blocks with its own arm blade and blasts them down. Whilst Baskin is being overpowered, the Conenose Robot blasts the Megazord with more lightning but they drive away and shot it. Commander Cruger then informs them that Drakel has made off with the Evil so they promptly destroy the Conenose Robot and the Bluehead with the Delta Blaster. 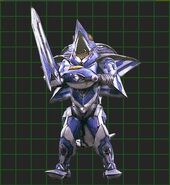 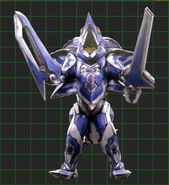 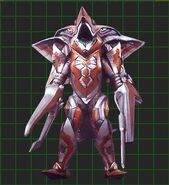