A Commando themed robot created by the fearcats to

destroy the rangers. It was upgraded when it had the super

armor until it was removed, it was destroyed by the drivemax

A giant commando-themed robot piloted by Mig and Benglo. It was their second secret weapon and they use it to attack the city and the Overdrive Rangers while Will Aston was battling Kamdor and Miratrix. It disabled the DriveMax Ultrazord's flight mode and was scared off by Tyzonn and the Rescue Runners. As it was getting away Will morphed and used his OO Zip Shooter and rides on the robot. Then later on, Mig pilots the robot and upgrades it with the Super Armor turning it into a Samurai-themed robot. It defeats the Super DriveMax and Flashpoint Megazords forcing the Rangers to separate the zords and make different combos for the DriveMax and Flashpoint Megazords. It took the DriveMax Megazord Crane Formation to remove the armor reverting it back to its default form and the DriveMax Megazord with Rescue Runners 1 and 2 and the Flashpoint Megazord with the Dozer and Sub Drivers to destroy this robot. GSB-Elite.jpg

can take to a Super Armor, then they begin the attack on the city

the rangers fight the robot with the Drivemax Ultrazord but the Ultrazord was no match for the Robot. then they retreat to find the super armor.

Then they find the super armor and begin fight the megazords,during the fight the Robot aquired the Super Armor to get upgraded he was no match for the zords but later the armor was removed and the zord was destroyed. 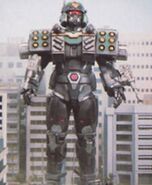 Retrieved from "https://powerrangers.fandom.com/wiki/Commando_Robot?oldid=618469"
Community content is available under CC-BY-SA unless otherwise noted.