"We are not cannon fodder! We were defeated by the Super Sentai of the past...reduced to lost wandering souls; we are the brave warriors of evil! (はではない！のスーパーにされ…のいをえた、とってっていた・のだ！, Ware-ware wa zako de wa nai! Kako no Sūpā Sentai ni taosare...munen no omoi wo kakaeta mama, tamashī to natte samayotte ita; aku no seiei da!)"
―Combined Combatant's first words.[src]

"Don't think that this is over yet!"
―The Combined Combatant's final words before its death.[src]

Los Dark commands foot soldiers that the past 34 Super Sentai battled, reduced to wandering souls. They see themselves as brave selfless warriors for evil. They reside within the dimension of the dead, whose portal is in the Ghost Ship. They have the ability to form the Combined Combatant (合体戦闘員, Gattai Sentōin), which can speak in roars as usual.

The Combined Combatant was formed via the Nanashi using it's power to combine all of the other footsoldiers together into a single being which was able to stand up to the Gokaiger.

But when that Nanashi prepared to deliver the finishing blow, the other footsoldiers began to rebel wanting to deliver the blow themselves, with various footsoldiers merely fighting among themselves. The fighting was seen by the Gokaigers (mainly Luka) as if it was dancing, inspiring them to use the Battle Fever J keys and destroy the Combined Combatant with the Penta Force cannon. 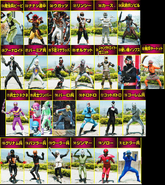 Most of the Footsoldiers used to make the Combined Combatant 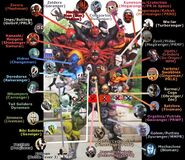 Diagram indicating which Footsoldier is located where