A special for Samurai and RPM

Something Fishy (Super Samurai)
The Rescue

Clash of the Red Rangers: The Movie is a two part special of Power Rangers Samurai. The movie focuses on the Team Up between the Samurai Rangers and Ranger Operator Series Red of Power Rangers RPM. The episode uses footage from the Super Sentai movies, Samurai Sentai Shinkenger The Movie: The Fateful War and Shinkenger vs. Go-Onger: Ginmaku Bang!!. This is the first team up since Operation Overdrive's Once A Ranger in 2007. The movie aired on November 26, 2011 as an hour long special.[1] It is also the first team up episode to use footage from its Japanese counterpart since Lightspeed Rescue's Trakeena's Revenge.

The Samurai Rangers team with the mysterious RPM Ranger Red and fend off the dual threat from Master Xandred's Mooger army and robotic super-villain from the RPM Ranger's dimension. When both Red Rangers get struck with hypnobolts, the two Red Rangers turn on one another and the fate of the world hangs in the balance.[2]

In an alternate universe, the RPM Rangers are fighting a battle against the evil computer virus Venjix. In the wastelands, the Sky Rev Megazord faces off against Professor Cog. Scott Truman gives Cog three steps to turn and fire as Cog tells him not to cheat. Both the Megazord and Cog take their three steps, but the Megazord is quicker on the draw and fires, knocking down Cog. However, he quickly gets back up, berating Series Red for his honesty and reveals a hidden shield. Cog fires his guns at the Megazord and knocks it down, with Series Red vowing to track him down. Cog leaves and says that he's off to destroy two worlds.

In the Samurai Rangers' dimension, a train car arrives in the city's subway as Cog and a team of Grinders come off it. Cog wonders how he'll get to Master Xandred's Netherworld. Meanwhille, a Nighlok called Sharkjaw attacks the city as Antonio arrives with the other Rangers to duel him. From a distance, Cog watches and is surprised at the existence of the Samurai Rangers. Sharkjaw spins around in a tornado formation and knocks down the Samurai Rangers. Mike gets back up and tries to hold Sharkjaw back, but he gets knocked aside as well. Antonio rushes forward but is knocked down once more. However, Sharkjaw begins to dry out and retreats. The Rangers demorph as Cog says that he'll pay Xandred a visit.

In the Netherworld, Sharkjaw returns as Xandred and Octoroo compliment him on the damage caused in the other world. Serrator announces that General Gut will lead the charge to invade Earth with his Nighlok army. Above ground, Professor Cog enters the Netherworld and says that his master requests the Netherworld's assistance.in destroying the humans in their dimension. Cog announces the plan to use the evil water of the Sanzu River to eliminate the humans in his dimension. He offers to help with Xandred's invasion in exchange for the water. He then proposes to deal with the Samurai Rangers while the Nighloks attack the city. On the underground subway, RPM Ranger Red hops off the train and heads into the city.

In the city, Mike wonders why Kevin didn't get ice cream with the other Rangers in celebration of beating Sharkjaw. Emily tells Mike to not pick on Kevin, but Mike retorts that he's eating vegetables, which Kevin explains that he had been feeling slow recently. Just then, a car falls from a bridge, nearly crushing the Rangers. A team of Grinders starts attacking construction workers, and the Samurai Rangers morph to fight them off. The five Rangers keep hitting the Grinders with their swords, but they don't cut through their plated armor. Jayden tells the team not to give up when RPM Ranger Red shows up. He tells the Rangers that their swords won't cut through the Grinders' armor and starts shooting them down with his Nitro Blaster. Ranger Red starts cutting into other battles the Samurai Rangers are fighting, which greatly insults them. After Ranger Red takes out the rest of the Nighloks, the Samurai Rangers de-morph and ask who he is. Ranger Red thinks the Rangers are mad since he took out the Grinders and wasn't sure if their swords could do the job. He introduces himself as Scott, but Jayden wants him to de-morph and show himself. Scott tells them that he can't de-morph for his own reasons, and Kevin and Mike wonder if they can trust him. Mia and Emily take a liking to him and drag Scott back to the Shiba House.

At the house, Ji works on his Harley-Davidson as the Rangers enter the compound. Mia rushes in to start dinner when Scott notices the Harley, thinking the Samurai only rode horses. Mentor Ji asks who they brought, and Jayden says they're about to find out. Scott looks around the Shiba House and says that their stuff was interesting and says they're "old school", and Kevin berates him for nearly hitting them in the earlier battle. The Rangers want an explanation, and Scott tells them that he's chasing Professor Cog as he's looking for a way to wipe out the humans from his dimension. Scott says he can't de-morph since he doesn't know if he can breathe the air in their dimension, as the humans of his world have been forced to move into a domed city due to the toxins the robots pump into the air. Scott is shown an extra room to sleep in, and Mike tells Emily that he's uneasy about Scott, especially how he looks at her. Emily tells Mike that she can't see his eyes anyway.

Back in the Netherworld, Xandred accepts Cog's offer and calls up Sergeant Tread to assist him. On the docks, the Grinders target Antonio first, but he hears their noise and quickly morphs. At the Shiba House, Mia offers Scott some food she cooked, but he declines. Mike gets the idea to wear his helmet whenever she cooks. The Gap Sensor goes off and Ji tells the Rangers that there's a disturbance on the docks, but its not a Nighlok. Scott takes Ji's Harley and travels to the scene. He sees Antonio fighting the Grinders and activates the Street Saber to back him up. At first Antonio thinks its Jayden but then realizes it isn't. The Grinders fire on Scott, but he shoots them down. Just then, Professor Cog shows up and fights Scott. The other five Rangers show up and fight Cog together, but they are easily knocked down. Cog then fires hypnobolts at the Red Rangers and starts up a vortex attack to send the two back to Scott's dimension. However, the other Rangers take the hit and are transported to Scott's dimension while the Red Rangers are knocked into the sea.

The Red Rangers emerge from the sea, with Scott realizing that the other five Rangers sacrificed themselves, and Jayden says they did it because he's the key to stopping Xandred. He then tells Scott to look at himself and asks if the other Rangers got sent to Scott's dimension. He says that's highly likely, but that the RPM Rangers would help his group out. In the Netherworld, Xandred asks Gen. Gut if the invasion forces are ready, and he says yes. Xandred thinks the invasion will be easy with most of the Rangers teleported to another dimension.

Back at the Shiba House, Ji tells Scott and Jayden of the large Nighlok invasion. Jayden summons his horse as Scott uses Ji's bike to race to the scene. Jayden beats Scott there, but the latter draws his gun. Cog is impressed with the effects of the hypnobolts as the two start fighting. While taking out a few Grinders and Moogers, Jayden doesn't want to hurt Scott, but they keep fighting. Tread compliments Cog on how well the hypnobolts worked. Scott fires the Nitro Blaster right at Jayden, but he counters by kicking the Spin Sword right at Scott. Both of them fall down, but they both get up and remove their shields. Scott then thanks Professor Cog for showing him the fakeout trick. Cog wonders how they broke free, and Jayden explains that Ji noticed that Jayden and Scott were fighting each other, so he used his own Samuraizer to cure the two of the hypnobolts. The two then realized they had to fake the fight to convince Cog, and Jayden says that he made a mistake since he can't reprogram humans.

Sgt. Treat takes the lead in attacking the Red Rangers as most of the Grinders transform into bikes as the Moogers ride them. Jayden summons a Ford Mustang for Scott and himself as they fight off the foot soldiers. Scott wheels the Mustang towards Tread as he hands Jayden the Nitro Blaster. Jayden fires and takes out one of Tread's tires.But Cog fires more hypnobolts at them but they dodge. Jayden tosses Scott the Shark Disc to become the RPM Shark Attack Ranger while Jayden uses the Black Box to become the Super Red Samurai Ranger. The two of them knock down Cog as the other Samurai Rangers are tossed out of the vortex. Emily tells Scott that the RPM Rangers say hello. The other Samurai Rangers attack Cog and Tread. After defeating the two of them, Jayden says that they have to fight off the rest of the Nighloks. The five Samurai Rangers ride on their horses and Scott and Antonio ride in the Mustang. However, the car stalls as Moogers surround Scott and Antonio. Meanwhile, Jayden duels one-on-one with General Gut. Jayden gets knocked around by the General and is about to be struck down when he activates the Shark Disc and becomes the Shark Attack Ranger. He introduces Gut to the Shark Sword as it stretches and winds across the battlefield, taking out the remaining Moogers. The five Rangers then perform the quintuple slash on Gut as he is destroyed.

Gut grows to Mega size, and the Rangers summon the Battlewing Megazord. The Rangers fight him, but Gut knocks down the Megazord, forcing the Rangers to lose the Battlewing formation. Kevin says that Gut is too strong for them, but he activates the Shark Zord as it fights against Gut's snake. The Samurai Megazord then combine with the Shark Sword to become the Samurai Shark Megazord. The five Rangers finish off Gut as Antonio cheers them on. Scott tells him to check for a wrench so they can head home. In the Netherworld, Xandred is frustrated that his new generals and Cog were even more useless than the Moogers.

At the subway, Scott tells the Rangers that he has to head back to his dimension. Scott tells the team that they're good, but still "old school". Emily tells him to say hello to the other RPM Rangers, and Mike wishes that Scott could demorph so they could say goodbye in person. He says the same, and tells Mike to look after Emily, since he sees how she looks at him. The train departs as a encouraged Mike joins the others in heading back to the house. 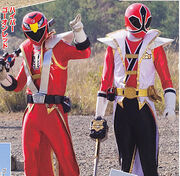 Mentor Reversing the Poison
Add a photo to this gallery

Retrieved from "https://powerrangers.fandom.com/wiki/Clash_of_the_Red_Rangers_-_The_Movie?oldid=437933"
Community content is available under CC-BY-SA unless otherwise noted.