Choujin Sentai Jetman is a video game based off the Super Sentai series of the same name. It was released for the Family Computer (or Famicom; known outside Japan as the Nintendo Entertainment System), and was published by Toei. In the 5 areas (area 6 is available after winning the first five), you play through with one of the five Jetman and then with Great Icarus against the boss. It also features a "battle mode" allowing the player to battle the bosses of any of the first five levels.

Each Jetman varies interms of weapons and hit points:

The areas and bosses include: 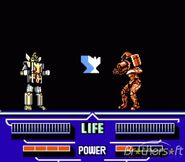 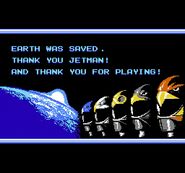 The ending of the game
Add a photo to this gallery
Retrieved from "https://powerrangers.fandom.com/wiki/Choujin_Sentai_Jetman_(video_game)?oldid=782601"
Community content is available under CC-BY-SA unless otherwise noted.