Charlie "Chip" Thorn (b. 1988) is the Yellow Mystic Ranger of the Mystic Force Power Rangers.

Chip is the self-proclaimed "Superhero Expert". Chip is considered a little odd as he loves fairy tales and phases in and out of reality, and repeatedly wore a superhero costume to high school and even to the prom. He was deemed by Madison as "the perfect example of a non-human species".

Chip is a fantastic archer, a member of the chess club at school, and a part of COUNTV - Containment Of Underworld Nocturnal Transylvanian Vampires.

Chip had no problem believing in magic and accepting his destiny as a Mystic Ranger. Chip is always cheerful and eager to learn all he can about magic.

Despite their wildly different personalities, Chip has been close friends with Vida ever since she stuck up for him when they were children. When she was turned into a vampire, he showed a far more serious and intense side in his attempts to save her, including taking on Koragg and Necrolai by himself, thus shows that they share a close bond.

Necrolai had cursed Chip with a soul specter, which starts to swallow him from the inside. Chip joined Daggeron on a trip to the dreaded Mount Isis to be freed from the spell. They get the Staff of Topaz and reversed the curse. Daggeron decided to train Chip on how to be a knight.

Chip and the Rangers gets trapped in an alternate reality where the Rangers never existed. They go to the Tribunal of Magic for help, and they later undid everything and gained new armor.

During the final battle, Chip aided his fellow Rangers in using their combined magic to destroy the Master. Later, he was last seen telling fictionalized tales of his battles as a Power Ranger to ladies from both realms.

Chip and the other Mystic Rangers returned as part of the army of Legendary Rangers that helped the Mega Rangers defeat the Armada once and for all, fighting in a huge battle against hundreds of X Borgs and dozens of Bruisers.

When Preston Tien read The Encyclopedia Of Magic & Spells is given to Preston Tien by Mick Kanic,The book contains a small bio on Chip Thorn and the others Mystic Rangers ,Chip was mentions by book as one of the magicians who defeated Octomus the Master.

Chip was shown in archive footage along with the other Mystic Rangers in Scrozzle's database, when the villains were looking for a past villain to revive with the Reanimizer, and came across Koragg The Knight Wolf.

When events set into motion by Lord Drakkon caused the timeline to split into pocket universe, each anchored on a powerset, the Mystic Rangers were split off into their own pocket universe. Green Mystic Ranger eventually received Zordon's call through the Morphin Grid and was among numerous Rangers who rallied to his pocket dimension led by the Quantum Ranger for the last stand against Lord Drakkon, reunited in the Command Center.

to teleported on the moon of the World of the Coinless for the fight against Drakkon against his Ranger Sentries led by Jason Lee Scott.

During the battle, Chip interacting with Gia Moran the Super Megaforce Ranger in doing so (while Charlie was also morphed), she takes briefly his Ranger form for part of the battle against Mastodon Sentries, also in the moment when Drakkon drains all powers of the morphers, Chip battles against Koragg atop the enemy ship.

During the battle on the moon of the World of the Coinless, the Mystic Rangers driving the Titan Megazord is seen regrouping with Jack and Kira. However, they're attacked by the evil Zord Serpentera, also is seen briefly in Tommy Oliver's vision when an alternate Kimberly threw a green chaos crystal thrown at him.

Chip's timeline is later restored by the Mighty Morphin Rangers after they defeated Drakkon.

Chip along with the other Mystic Rangers are among all the Ranger teams which appear in the Korean-developed mobile game Power Rangers Dash.

As the Yellow Mystic Ranger, Chip wields the power of lightning. His main weapon is the Magi Staff Crossbow. He owns a Mystic Racer and his Titan Form is the Mystic Garuda, which becomes the wings for both the Mystic Dragon and Titan Megazord. With his Legend powers, he can merge with Xander, Vida, and Madison to form the Mystic Lion.

The Mystic Garuda is the bird-like Mystic Titan form of the Yellow Ranger. Forms the wings of the Titan Megazord and the dragon. Has enormous wings in place of arms.

A Zord created when the Green, Pink, Yellow, and Blue Mystic Rangers combine into one being. This massive White Lion Zord forms the majority of the Manticore Megazord. 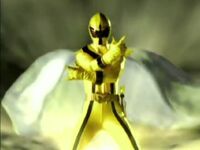 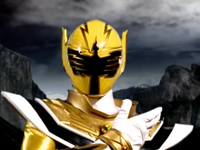 A female version of the Yellow Mystic Ranger as seen in Power Rangers Super Megaforce.