The Chameleon System (カメレオン座系, Kamereon-Za-Kei) is a star system home to a planet inhabited by an extra-terrestrial human race from which Hammie heralds from; distinguished by their chameleonic camouflage ability, at least some trained as shinobi in the Chameleon Ninja Art (カメレオン忍法, Kamereon Ninpō). As one of the 88 Constellations, it is part of the space dominated by the Space Shogunate Jark Matter, with its power embodied by its very own legendary Kyutama and Voyager wielded by the native Kyuranger warrior.

The Chameleon System was conquered by Jark Matter when Hammy was still a child. Having spotted the advance guard of Indavers, the young Hammy, who until then had been hesitant to speak up, mustered the courage to warn her teacher and so her ninja band was able to escape the attack. Space.15: Savior of the Water Planet Vela However, Hammie's master, Tsurukiku, was lost and presumed dead only to appear again four years following the fall of Jark Matter. Uchu Sentai Kyuranger vs. Space Squad

The Chameleon Kyutama (カメレオンキュータマ, Kamereon Kyūtama, lit. Chameleon Nine Ball) is the Kyutama which embodies the constellation Chamaeleon. Awakened in the Chameleon native Hammy, it allowed her to become Chameleon Green, granting her control of the Chameleon Voyager. 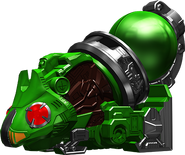 Chameleon Green
Add a photo to this gallery

Retrieved from "https://powerrangers.fandom.com/wiki/Chameleon_System?oldid=738972"
Community content is available under CC-BY-SA unless otherwise noted.