Chad studied under a karate master named Tomashiro, who felt that Chad's true destiny was as a martial arts master and not a Ranger. Tomashiro then helped train a monster named Cyclopter, hoping to replace Chad as his best student (Cyclopter even defeated Chad in battle), until Cyclopter turned on him. Chad remembers everything Tomashiro taught him then and eventually defeats Cyclopter, and Tomashiro even comes to ask Chad for a tour of the Aqua Base. Chad also temporarily had a relationship with the mermaid Marina, but they parted ways eventually. Chad becomes close with fellow Ranger Kelsey during the series.

After leaving Lightspeed, Chad became a lifeguard, but returned to help his team fight an undead Vypra with the Time Force Rangers. He fought alongside his Blue Ranger successor.

The Lightspeed Rangers were featured in a chronicle of Power Ranger history compiled by Tommy shortly after he formed the Dino Rangers, which was found by the nascent Ranger team in the Dino Lab.

Chad and the other Lightspeed Rangers returned as part of the army of Legendary Rangers that helped the Mega Rangers defeat the Armada once and for all, fighting in a huge battle against hundreds of X Borgs and dozens of Bruisers.

When events set into motion by Lord Drakkon caused the timeline to split into pocket universe, each anchored on a powerset, the Lightspeed Rangers were split off into their own pocket universe. Lord Drakkon then attacked them. He was seen attempting to fend off the Ranger Sentries at the Aquabase.

When the timeline is restored, so is Chad.

Blue Lightspeed Megabattle were created by Angela and Clark Fairweather; they were activated by dialing 8-6-1 on the Battle Booster. 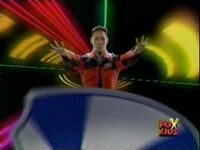