Alien Rangers of Aquitar, Par I

He is also referred to as Blue Alien Ranger on Earth, as well as Mighty Morphin Alien Blue Ranger a variation on his alternate in-show label, though it is more in reference to the show itself than a proper label.

Like his Mighty Morphin counterpart, Billy Cranston, Cestro is a technological genius. When Billy successfully managed to restore his own age by means of the Power Coins before they were destroyed, he and Cestro frequently worked together to find a similar cure for the other Rangers - as well as finding a means to keep the Aquitians hydrated with pure water. In this way, Cestro was the Alien Ranger who received most attention in storylines (alongside Delphine, the team leader).

Cestro had a guest appearance in Power Rangers: Zeo, in which he came to Earth again, seeking Billy's help to fight off a menace on Aquitar called the hydro-contaminators. Billy's trip to Aquitar saw the beginning of the story arc in which he was permanently written out of the show. Indeed, the Aquitian that Billy falls in love with on Aquitar, Cestria, is believed by some to be Cestro's sister or similar relative (though others dispute this because of the different races of the actors playing the two characters).

During the invasion of the universe by Dark Specter's United Alliance of Evil, Cestro and the other Aquitian Rangers battled Divatox's army on Gratha, where they were defeated. They were later saved by Zordon's Energy Wave.

Cestro and the other Aquitian Rangers returned as part of the army of Legendary Rangers that helped the Mega Rangers defeat the Armada once and for all, fighting in a huge battle against hundreds of X Borgs and dozens of Bruisers. He then returns to Aquitar.

When events set into motion by Lord Drakkon caused the timeline to split into a pocket universe, each anchored on a powerset, the Alien Rangers were split off into their own pocket universe. Blue Aquitar Ranger eventually received Zordon's call through the Morphin Grid and was among numerous Rangers who rallied to his pocket dimension led by the Quantum Ranger for the last stand against Lord Drakkon, reunited in the Command Center.

Battle on the moon and lost his powers

The Alien Rangers like the others team Rangers teleport to the Moon of the World of the Coinless, facing some new types of Ranger Sentinels, Cestro is horrified by the power of Serpentera, but this distraction leaves him open and his powers are taken by Drakkon with his sword.

Cestro's timeline was later restored by the Mighty Morphin Rangers after they defeated Drakkon. 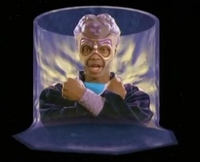 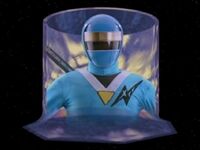