The Cerberus Minosaur (ケルベロスマイナソー, Keruberosu Mainasō) is a cerberus-based Minosaur monster from the Warfare Tribe Druidon, created from the negative emotions of Sanae Hiiragi, based on her resentment for people who mistreat and abandon their pets. 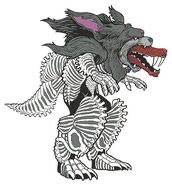