The Cell Shift Morpher is a device used by the Ranger Operators Red, Blue and Yellow. They can be used to communicate with other Rangers and Doctor K herself, as well as summoning and piloting the Zord Attack Vehicles.

The Morphers were created by Doctor K after she creates the Venjix Virus.

Sometime after Venjix was defeated, he hid in a Cell Shift Morpher, which was later transported to Grid Battleforce.

It was later revealed that Venjix was contained in one when Nate Silva was using it for research and inadvertently creates a new form for the Venjix Virus called Evox. He then uses the Cell Shift Morpher that contained him to repair himself.

They are able to morph by inserting a morphing Cell Chip and using the command phrase "RPM, Get In Gear!". The sequence themselves has the three run through a track and passing through panels which forms the suit then skidding to a halt where their seat belts and helmets are then applied. 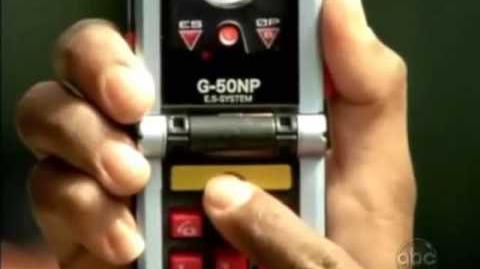