Two millennia ago, the Yokai served under Daimaou and terrorized humans before he was sealed away by the three holy men that became the Sanshinshou. As a result, the Yokai began acting on their own before they are united under Nurarihyon prior him their powers being sealed away 400 years ago by the Kakurangers' ancestors.

The Yokai that escaped sealing changed their forms to keep up with the times, hiding as humans with some aspect of their true nature present. But due to Kappa's actions, the Yokai begin to return to power as Gashadokuro begins uniting them under his banner while reviving Daimaou.

Despite being the main antagonists of the series, the Yokai are some of the more tragic villains. As they want to live and be like humans but do evil deeds to fulfill their wishes.  When threatened with defeat, the Yokai are able to invoke negative human emotions they store within the clouds to infuse them with power. This power manifests as a bolt of lighting that strikes the Yokai and turn them into giants.  When destroyed, their soul rised up to the sky and self-destructs.

Eventually, Gashadokuro became acting leader of the Yokai. Before he died at the hands of the Kakurangers, he successfully freed Daimaou, who took over as their leader. In the final battle, the Kakurangers defeated Daimaou and successfully sealed him once more, bringing an end to the Yokai battle.

In the middle of the Kakurangers' battle with the Yokai Army Corps, the Dorodoros were one of five groups of revived Foot Soldiers along with the Batzler Soldiers, Grinam Soldiers, Golem Soldiers and Cotpotros, which were summoned by Zaigan in Emperor Daidas' invasion of Earth. The evil army was wiped out by a gathering of five Super Sentai Teams: Kakuranger, Fiveman, Jetman, Zyuranger, and Dairanger. Super Sentai World

Several Dorodoros were part of an army of past enemy grunts that were fought by the Gokaigers in Los Dark's ghost dimension which housed the 1500 spirits of the villains defeated by the Super Sentai. After losing some of their number in an initial skirmish, the remaining members from each grunt group merged to form the Combined Combatant. Though the stronger opponent, the Combined Combatant proved to be unstable due to internal conflicting among the grunts composing him over who got to finish the pirates off. Taking advantage, the Gokaigers used the Battle Fever J Ranger Keys to destroy the Combined Combatant with the Penta Force cannon. Kaizoku Sentai Gokaiger the Movie: The Flying Ghost Ship 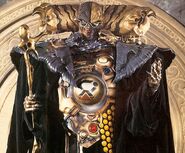 Nurarihyon
Add a photo to this gallery

Daidarabotchi
Add a photo to this gallery

Flower Ninja Ran
Add a photo to this gallery

Dorodoros
Add a photo to this gallery