Based from the Death Neziros within the Neziregia dimension led by Evil Electro-King Javious I, along with Hinelar and his subordinates: Shibolena, Yugander, and Bibidebi, to invade Earth with various plans to subjugate humanity. The Nezirejia however, is met with resistance from INET and Megaranger, destroying their main battleship Nezi Crusher, forcing Hinelar's group to rely on schemes and tactics via the Nezire Beast instead of direct confrontation, all of which resulted in failure thanks their adversaroes.

After several repeated failures, Javious sent his close warrior Guirail to aid Hinelar in taking over Earth, believing that the Doctor himself is incapable of completing the goal by himself. Though Guirail is shown to be capable of crafting evil and devious plans, his methods and personality are greatly met with disapproval from Hinelar's generals.

Eventually, Javious becomes impatient with both Hinelar and Guiral, threatening to punish them and all the generals should they remain unsuccessful in taking over Earth, culminating in Guirail forcing Yugande to fuse with him in an attempt to save himself from Javious' anger. The action is a final straw for Hinelar who views his subordinates important and irreplaceable, causing him decides to get rid of Guirail by tricking him into using NeziGen Capsule, transforming him into a suicidal and destructive monster, both as a payback and to reclaim his authority within the organization.

Following Guirail's demise, Hinelar began creating more powerful Psycho Nezilars and the destructive Neziranger to combat against the Megaranger. Unknown to Javious, Hinelar has grown tired of his master's orders and begins to siphon Javious's energy to his villainous squadron creation, weakening Javious as the Neziranger continue to fight their archenemy and ultimately destroying the Electro-King once all the five members are vanquished by the Megaranger, leaving Javious' Heart behind for Hinelar to use as he wishes.

Having no need to remain in the now collapsed Nezire Dimension, Hinelar and his subordinates move the Death Neziro to the Earth's atmosphere as Hinelar enact his scheme to create Hinelar City in an attempt to turn humanity into data cards so that he can recreate them as he desires. Hinelar begins his plan by ordering mass kidnapping and brainwashing people into becoming his underlings for them to facilitate the city's construction and the production of the Kunekune, eventually turning people into data cards through the power of Javious' Heart with the Megaranger being among the captives.

Believing himself to be unstoppable, Hinelar publicly reveals himself to the entire world and announces his intention to rule the world with fear through the power of twisted science. Unfortunately for Hinelar, the Neziranger return with vengeance to their creator, using the very same Javious' Heart to restore their physical forms and exact their revenge on him and the Megaranger. Though wounded, Hinelar is safely taken away from the city by Shibolena and Yugande as the Neziranger proceed to restore their adversary for the final battle. The Hinelar City is eventually destroyed by self-destruct device operated by Mega Silver after he successfully restores all the captives back to normal during the confusion between the battles of the three groups, ending its terror while also taking the Neziranger with it.

With his lifelong goal destroyed, Hinelar becomes increasingly more psychotic, focusing his remaining plans to destroy the Megaranger and INET directly. Around this point however, Hinelar realizes that his body begins to warp into himself as a side-effect of staying in Nezire Dimension. The death of Yugande and Shibolena ultimately drove him to edge, transforming himself into a monstrous form in an attempt to fight and kill the Megaranger and Kubota, but is unable to maintain the form due to his body condition, forcing him to unveil his final weapon: the Grand Neziro, a giant robot transformed from Death Neziro synches to Hinelar's body and movement. Though Grand Neziro proves to be formidable adversary against the Megaranger and their Mecha, Hinelar's immenient destruction as the warping goes on pushing him to self-destrucing the Grand Neziro in a final attempt to take the Megaranger with him. Ultimately, the Megaranger survive Hinelar's final attack, and with the Doctor's death, ending the reign of Nezirejia for good.

Unknown to the Megaranger however, Hinelar have Bibidebi sent out his last creation, Hizumina, away into the space before his and Bibidebi's demise. Hizumina's defeat at the hands of the Megaranger one year later marks the end of the empire, this time permanently.

Several Soldiers Kunekune were part of an army of past enemy grunts that were fought by the Gokaigers in Los Dark's ghost dimension which housed the 1500 spirits of the villains defeated by the Super Sentai. After losing some of their number in an initial skirmish, the remaining members from each grunt group merged to form the Combined Combatant. Though the stronger opponent, the Combined Combatant proved to be unstable due to internal conflicting among the grunts composing him over who got to finish the pirates off. Taking advantage, the Gokaigers used the Battle Fever J Ranger Keys to destroy the Combined Combatant with the Penta Force cannon. Kaizoku Sentai Gokaiger the Movie: The Flying Ghost Ship 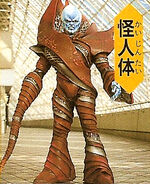 Doctor Hinelar (deceased)
Add a photo to this gallery 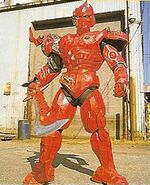 Guirail (deceased)
Add a photo to this gallery

Jaden Sentai Neziranger (deceased)
Add a photo to this gallery

Hizumina (deceased)
Add a photo to this gallery 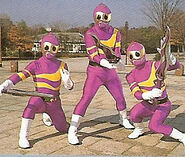 Soldiers Kunekune
Add a photo to this gallery