The Vaglass (ヴァグラス, Vagurasu) was an organization bent on ensuring the return of Messiah, a dangerous computer virus, to the human realm.

The Vaglass came into being the day when Messiah was born on Christmas 1999 when a computer virus underwent an evolution from the Enetron in the system it infected. Within no time, able to assimilate any inorganic matter, Messiah took control of the complex and all the mecha within it before attempting to take over the world's communication, power, and defense systems. However, the scientists sacrificed themselves to teleport the entire Transport Center into Hyper Space to trap Messiah. However, due to the dimension's ability to digitize organic matter, Messiah used this to absorb the scientists to use their collective intellect in serving him as both his "Engineers" and as source material to create the avatar Enter to serve as his eyes and ears.

In 2012, after thirteen years since he was trapped in Hyper Space, Messiah gained the means to send Enter back into reality, with the ultimate goal of gathering enough Enetron needed to bring Messiah back into reality so he can assimilate the entire planet to cement his reign. Many of these plans involve the acquisition of Enetron, the city's energy source.

But due to the constant meddling of the Go-Busters, and the addition of Escape to take over some of his duties, Enter began to deviate from his programming and made his move after Messiah's defeat. In his ultimate scheme, Enter resolves to become the new Messiah by using the Messiah cards to gather data on humans with most of his data from Hiromu Sakurada. Using the data of Escape to test his abilities to merge life forms into her being, Enter eventually gains the abilities to merge all forms of matter and shape them into his will. Luckily, with Masato Jin sacrificing himself to destroy the final Messiah Card, Enter is destroyed with the Vaglass no more.

and Super Sentai, which included the Go-Busters trio, giving them a hard time. The heroes of recent years were in a pinch until the arrival of a force of Sentai and Rider reinforcements led by Akarenger and Kamen Rider #1

Enter and Escape were revived, with an army of Buglars, as part of a one-time Vaglass restoration program in response to a newly emerged evil, Space War God Voldos. Joining an alliance with Voldos and the Deboth Army, the revived Vaglass fought not only the Go-Busters but the Kyoryugers as well as other Dinosaur Super Sentai, Zyuranger and Abaranger.

TV STORY-Tokumei Sentai Go-Busters vs. Kaizoku Sentai Gokaiger: The Movie recreations of Enter Unite and Escape Evolve were brought forth by Bangray among a collection of the most nefarious adversaries faced by the Super Sentai. Overwhelming Gokai Red and Zyuoh Eagle initially, Bangray's forces were matched when the Gokaigers and Zyuohgers joined their respective Red warriors. Engaging Yamato Kazakiri in the new form of Zyuoh Whale, "Escape" and "Enter" were ultimately destroyed by his Zyuoh Final.

A pack of Buglars were among the Shocker

bonus stage. This army was ultimately wiped out by a combined force of Sentai Rangers and Kamen Riders. 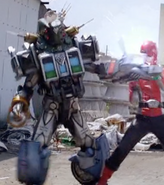 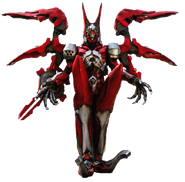 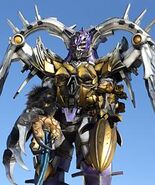