RangerWiki
Register
Don't have an account?
Sign In
Advertisement
in: Jungle Fury, All articles with unsourced statements, Ranger,
and 13 more

The Spirit Rangers are a sub-team of three Jungle Fury Rangers created from the spirits of Master Phant, Master Swoop and Master Finn. Originally created by the Phantom Beasts and controlled using the Crystal Eyes, the Spirit Rangers were once enemies to the Jungle Fury Rangers until they were liberated, allowing the core three Rangers to summon the Ranger based on their previously respective masters.

In their first appearance they battled the Jungle Fury Rangers under the control of the Phantom Beasts. Later on RJ figures out how to jam the frequencies that connect the Masters to the Spirit Rangers and is able to dissipate the spirits. Later RJ modifies the claw cannon to hold the spirits of the Elephant, Bat and Shark Animal Spirits and uses it to cancel out the spirit of the Shark Spirit Ranger, which traps Master Finn inside one of the Crystal Eyes. Flit salvages the eye after a Phantom Beast attempts to throw it in the sea and brings it to RJ. Soon after, all the masters are rescued and the Spirit Rangers they control fight alongside the Jungle Fury Rangers. The masters then let the rangers take control of the Spirit Rangers, which they summon into battle in pinch situations (Red = Shark, Blue = Bat, Yellow = Elephant).

The Spirit Rangers do not use Zords but the individual Rangers actually morph from the Elephant, Bat, and Shark Animal Spirit.

[Citation needed] are standalone Animal Spirits that form top-body armor for the Jungle Pride Megazord and the Jungle Master Megazord. Each zord, when powering up the Megazord modifies its spin attack with various weapons.(similar to the weapons the three Jungle Masters use) 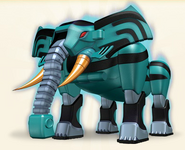 The Spirit Rangers came about during a meeting about toys. Marchand pitched the idea of making the three masters into Rangers, rather than do more motorcycle toys: previous experience, going back to Tommy, had shown kids enjoyed having extra Rangers to play with. [1]

Bandai[2] first released several Spirit Ranger figures in the Jungle Fury toyline meant to serve as pilot to the Roar Max Zords. The comic that goes with the figures states that the Masters were Rangers 20 years ago and are now inhabiting beast bodies. In the comic they are now training the Jungle Fury Rangers in place of their masters in the show, though in appearance they resemble the Kensei from Juken Sentai Gekiranger, the source material of Jungle Fury.

Fans debated whether the Spirit Rangers would appear on the show. When the Shark, Elephant and Bat Zords appeared in Power Rangers Jungle Fury without Rangers piloting them, it became apparent that there would indeed be no Rangers outside of those seen in Gekiranger, the show's Japanese counterpart. However months later the three Rangers appeared in an issue of Televi Kun promoting Jungle Fury, wiht their debut appearance in "Fear and the Phantoms".