Space Shogunate Jark Matter (宇宙幕府ジャークマター, Uchu Bakufu Jāku Matā) was the evil government which has dominated the 88 constellation systems and controlling all of space, usurping the Space Federation. They were collecting Planetium (The Power of the Planets) to destroy the entire universe until nothing remains behind.

The self-proclaimed embodiment of misfortune Don Armage came into being as a result of pain and suffering across space amassed as universal despair. Immensely powerful and intent on dominating the entire universe, Don Armage established himself as Shogun of the Space Shogunate Jark Matter. Space.Final: Echo in the Universe! Alright, Lucky

In their first invasion 300 years ago, they are opposed by eighty-eight warriors from the eighty-eight star systems aboard the Argo, however he managed to kill the other eighty-six, leaving only two survivors. Tsurugi converted his immortality into raw power, but he still failed to defeat Don Armage, when Tsurugi is about to do an attack that costed his life, his comrade Quervo stopped him before Don Armage killed him when Quervo takes a blow meant for Tsurugi. However, it is shown that later, Tsurugi managed to defeat Don Armage and goes into suspended animation. But, unknown to him, Don Armage is somehow alive and memories about Tsurugi back on Earth was erased.

Ruled by the Shogun Don Armage, Jark Matter became the dominant power in their region of space by seizing the 88 constellation systems over a period of several years. Seeking the essential energy source which formed every world, Planet Jume, Jark Matter installed a Moraimarz machine, overseen by a Daikaan, on every planet they conquered to drain their Jume, with the draining process ultimately resulting in the destruction of these worlds. Space.3: The Man from the Desert Star

Don Armage established Jark Matter's new capital as the planet Southern Cross in the Minami Juuji System, whose ruler Southern King of Minami willingly submitted to the Shogun at the expense of his people due to his philosophy that the weak were destined to serve the strong whom dominated the universe. In return, Don Armage granted Southern King the title of Karo, serving as guardian of the Minami Juuji System. Space.41: Rushing! Planet Southern Cross

In the Chameleon System, the advance guard of Indavers was spotted by the young Hammy who, though having been hesitant to speak up until then, mustered the courage to warn her teacher. Thus, her ninja band was able to escape the attack. Space.15: Savior of the Water Planet Vela Under Jark Matter's oppression in the Kajiki System, a food shortage occured, leading the young Spada to learn to cook food for his numerous siblings. Space.8: Secret of Commander Shou Ronbou

Among the worlds that fell to Jark Matter was Earth, Space.1: The Super Stars of Space which evidently had an abundance of Planet Jume as numerous Moraimarz were installed on it as opposed to only one, while Don Armage indicated a greater secret. Space.4: Dreamy Android

Acquiring the Sasori System, Don Armage personally addressed Scorpio, a Scorpionman warrior who had grown to seek power to the point of selling out his own tribe to Jark Matter, leaving them to be slaughtered while turning his back on even his younger brother Stinger. Space.5: 9 Ultimate Saviors Enticing Scorpio to serve Jark Matter in exchange for the power he sought, Don Armage transformed him into a scorpion monster; initially enlisting Scorpio as an assassin, the Shogun would be pleased enough by his service, which included the elimination of the Oushi System dissident Dr. Anton, that he would eventually promote him to Karo of the subjugated Sasori System. Space.13: Stinger's Challenge To His Brother! Secretly, however, Scorpio aspired to one day surpass in power and kill Don Armage, upon which he would become the new Shogun of Jark Matter and rule the universe himself. Space.16: Stinger's Reunion with His Brother

Under the order of the Shogun, the elite assassin duo Ikargen and Mardakko destroyed over a thousand planets. Space.7: Take Back the Birthday! In the Ookami System, Garu learned the price of defiance when his wolfman clan was slaughtered by Jark Matter. Space.1: The Super Stars of Space

On the flat world of Crotus, Jark Matter's subjugation was overseen by the Karo Eriedrone. His forces, however, were unable to prevent the initial three Kyurangers from allowing numerous civilians to escape Jark Matter's grip. This was realized by the Don Armage, who blasted Eriedrone back when the Karo contacted him to announce the joyous news of the conquest. Ordered by Don Armage to eliminate the insurgents, Eriedrone had his Big Moraimarz go to hunt the Kyurangers down on Jagjag. Ultimately, however, Eriedrone only succeeded in providing the trial by fire which caused a further two Kyurangers to emerge, making a combination of five Voyagers to form KyurenOh which destroyed the Tsuyoindaver that Eriedrone sent against them on Jagjag's moon. Space.1: The Super Stars of Space

Space.3: The Man from the Desert Star

A wounded Tsuyoindaver attempted to avenge and succeed Eriedrone as Karo of the Ite System only to be soundly defeated by Sasori Orange, who left him buried in the sand. Sasori Orange Chapter

Space.7: Take Back the Birthday!

of the Game World

to pilot. He was ultimately vanquished by a duplicated KyurenOh and Kamen Rider Ex-Aid

Space.11: Three Kyutama to Save The Universe

The Return of Scorpio

In the middle of a meeting with Don Armage, Ikargen tells Madakko to greet the Karo of the Scorpius System, i.e. Scorpio, who has been sent by Armage. When Scorpio is welcomed to earth, he mentions that he is looking forward to seeing the Kyurangers, especially Stinger. Space.12: 11 Ultimate All-Stars

Space.13: Stinger's Challenge To His Brother!

Space.16: Stinger's Reunion with His Brother

Space.17: Lighting the Dome of Darkness!

Removing Tsurugi Ohtori From History and the Vice-Shoguns

Space.27: Indaver Panic Within the Orion!?

Space.30: All Right! The Miraculous Kyutama

Space.35: The Secret of the Universe's No.1 Idol

Space.36: The Legend That Sleeps in Lucky's Homeworld

Space.37: Lucky’s Reunion with His Father

Space.39: The Great Adventure of Perseus

When Don Armage finally has his meeting with Tsurugi Ohtori, Tsurugi questions him about why he wants to destroy the universe. He explains that he wants to recreate the universe in his own image. Armage then proceeds to explain to him that the real reason he was called to a meeting was to reveal his true form to him. Space.43: The Vow on the Holy Night, 'Alright, Lucky!'

Space.46: Between Hope and Despair

With Jark Matter dissolved, the Space Federation was restored with Tsurugi Ohtori reinstalled as President. The former Rebellion was repurposed to preserve peace across the universe and restoring the liberated constellation systems. Among the dispersed Kyurangers, the BN Team of Balance and Naga Ray took to recovering the treasures which had been pillaged by Jark Matter across the universe. Space.Final: Echo in the Universe! Alright, Lucky

The universe was still in the process of being restored as late as four years following the fall of Jark Matter. At this time, the ruins of Moraimars could still be found on planets such as Earth, where one was used as a hide-out for Space Ninja Demost

Hoshi Minato, however, had a hidden secret in his guitar, which held Jark Matter's secret treasure, and to retrieve it, the new leader, Don Arkage, had rivived Vice Shogun Akyanba and allied with Rirus Lippig of the Interdimensional Crime Group Gangler.Lupinranger VS Patranger VS Kyuranger 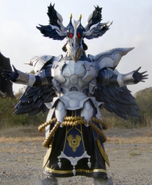 Don Arkage
Add a photo to this gallery

Akyachuuga
(deceased)
Add a photo to this gallery

Mecha Madakko
(originally assassin, later promoted and then deceased)
Add a photo to this gallery

Southern King
(deceased)
Add a photo to this gallery

Mika Retsu
(deceased)
Add a photo to this gallery

Microtsuyoindaver
(deceased)
Add a photo to this gallery

Gyabler
(deceased)
Add a photo to this gallery 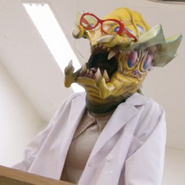 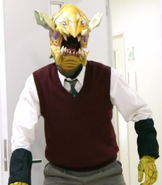 Kochoindaver
(deceased)
Add a photo to this gallery

Ikargen
(deceased)
Add a photo to this gallery

Kaal Indaver
(deceased)
Add a photo to this gallery

Dogyun
(deceased)
Add a photo to this gallery

Rirus Lippig
(Ally from the Interdimensional Crime Group Gangler).
Add a photo to this gallery

Tsuyoindaver
Add a photo to this gallery

Hebitsukai Metal (good)
Add a photo to this gallery