The Space Ninja Group Jakanja (宇宙忍群ジャカンジャ, Uchū Ningun Jakanja) were a ruthless band of alien ninjas from outer space who served as the main antagonists of Ninpu Sentai Hurricaneger.

Thier goal was to search out and uncover the Evil Will, bringing it into our universe to annihilate the universe and create a new one for it to control. It promised them that they would be it's commanders with amazing powers.

The Evil Will has existed as long as the universe as the embodiment of evil within it, but has always desired to create a new universe where it is in full control of the universe and everything about it. To its end, it has sought out those with dark hearts throughout the universe that can coordinate with reading its messages, sent by showers of meteors around various planets that secretly contain cryptic prophecies that, if accomplished, could create a black hole-like opening that would absorb and annihilate all matter within the current universe, leaving nothing behind and allowing for it and it alone to survive and recreate the universe in its own image. 500 years prior to the series, the Evil Will became known by a powerful space ninja known as Boss Tau Zant, who saw this as an opportunity to allow itself to assist the power to destroying the universe and creating another in its place, referring to the hole that would accomplish it by the cryptic term of "that". To this end, Tau Zant created the Space Ninja Group Jakanja, whose only purpose is to figure out how to achieve that and grant the Evil Will this ultimate desire.

After the destruction of the Ikazuchi School with Tau Zant's initial invasion of Earth, the Kasumi brothers partook in the instructions of their father, becoming the Gouraiger and joining with the invading Jakanja to bring "that" about. The duo follow the orders of the Evil Will by way of their father's prophecy device until elder brother Ikkou realizes the truth of the prophecy: for "that" to emerge, one of the Kasumi brothers would have to kill the other! After realizing the mistake and working together with the Hurricaneger, the duo turn their back on their father and ultimately the Evil Will's prophecy, thus slowing, but not stopping, the path for "that".

A prophecy for a second path to "that" was sent by the Evil Will to Earth during a period where the Sixth Spear, Satarakura had summoned his Ninja Wolf Beasts Fangol to Earth to run amuck. According to this prophecy, "that" would occur amidst the chaos brought about by both the Fangol and the wolfmen they create from the people of Earth, even after they are killed and merged into the Giant Beast Fangerus. This second prophecy was picked up by Space Union School ninja Shurikenger, who intervenes by combining all of the ninja schools together to summon the Super Karakuri Beast Revolver Mammoth, using its power to unite with Gourai Senpuujin to destroy Fangerus and stop another of the Evil Will's paths.

The third, and ultimately successful, path to "that" by the Evil Will is initially sent to Earth after an upgraded "clone" of the Third Spear, Manmaruba is created to assist the Jakanja and take revenge on the Gouraiger. While the Manmaruba clone is able to read the prophecy, the amount of information entering him becomes overwhelming to the point that it mutates him into a massive, unintelligent creature that can't make use of the knowledge. As the Earth ninja take down the Manmaruba clone, Tau Zant reads its mind and discovers the full prophecy from the Evil Will, immediately using its knowledge to have his final spear, the Seventh Spear, Sandaaru, go to planet Astram to destroy it and steal a special stone containing a powerful Shinobi Medal within it, containing a weapon known as the Raging Arrow. Through the trials of the ninja of Earth trying to stop this weapon, the Jakanja discover that its partner weapon, the Grieving Bow, resided on Earth within the body of the powerful Lady Gozen, the leader of the Space Ninja Union school. Manipulating Gozen's emotions to force her to become sad, Sandaaru kills her and steals the Grieving Bow medal, finally gaining the power needed for "that" to be achieved.

TV STORY-Scroll 39: The Seventh Spear and the Mysterious Stone

With both Raging Arrow and Grieving Bow in hand, the Evil Will sends by meteor a final message to Jakanja in order to teach Tau Zant the method of using the two medals to create the universe-annihilating hole. To prepare his body for the weapon, Tau Zant has Satarakura vacuum up both anger and sadness from the people of Earth, so he could absorb it and achieve the ultimate form to use the weapons. Although the ninja stop the Sixth Spear at the cost of Shurikenger's life, Sandaaru is able to deliver the power to his master, who upgrades and uses his new power to fire the arrow with the bow into the ocean, starting the cycle for the Evil Will's annihilation. However soon after firing the arrow, Tau Zant is killed by Sandaaru when he realized the Spears had been used as nothing but Tau Zant's tools for the Evil Will's desire. The Hurricaneger and Gouraiger destroy the remaining Dark Spears, but the process of the Evil Will's destruction continues to grow as the planet becomes consumed by the evil hole. Taking a hint from Oboro Hinata prior to losing contact with her, the Hurricaneger use Hurrier Mode to enter through the hole into the other universe to reclaim the Raging Arrow and Grieving Bow, becoming attacked by the Evil Will trying to stop them. Gathering both weapons, they fire it from the side of the dark force's new universe, destroying it while stopping the process in their own.

After its new universe is destroyed by the Hurricaneger, the Evil Will returns to the main universe, but begins to take the forms of its Jakanja servants in a final effort to defeat the Earth ninja. First taking the form of a giant Tau Zant, the Hurricaneger stab him in the same weak point Sandaaru used to kill the original. Then becoming all of the Seven Dark Spears, the team is rejoined by the presumed dead Gouraiger, who individually defeat all of the Jakanja servants. Finally becoming Tau Zant one last time, the Hurricaneger and Gouraiger attack it with the Victory Gadget, destroying the Evil Will and the final member Jakanja once and for all.

Several Genin Magerappa were part of an army of past enemy grunts that were fought by the Gokaigers in Los Dark's ghost dimension which housed the 1500 spirits of the villains defeated by the Super Sentai. After losing some of their number in an initial skirmish, the remaining members from each grunt group merged to form the Combined Combatant. Though the stronger opponent, the Combined Combatant proved to be unstable due to internal conflicting among the grunts composing him over who got to finish the pirates off. Taking advantage, the Gokaigers used the Battle Fever J Ranger Keys to destroy the Combined Combatant with the Penta Force cannon.

Eight years after the end of the Jakanja, Sandaaru Jr. and Satarakura Jr. worked as Action Commanders for the Space Empire Zangyack. They were sent to Earth by Warz Gill with a scheme to turn humans into chestnuts to power their missile. Like his father, he was able to perform many of the {{Space Ninpou (宇宙忍法 Uchū Ninpō) along with his own abilities such as Rope Skull (縄頭蓋 Jōzugai).

Sandaaru Jr later arrives, saving his comrade from Captain Marvelous, Joe Gibken and Luka Millfy. Both of them battled the three Gokaigers who used the powers of Livemen and the Abarangers, but the ninja duo are able to defeat them. As the rest of the Gokaiger crew arrive, the ninjas take their leave.

Later, they were tracked by Gokai Silver who uses the Bouken Silver Ranger Keys. The Gokaigers get the jump on the space ninja duo and save the chestnuts. With the Gokaigers back to normal, he chickened out as some Genin Magerappa ran in. Sandaaru Jr then decided to destroy the Gokaigers himself and used the Enlargement Jutsu (巨大身の術, Kyodaimi no Jutsu) to make himself grow. With the other Gokaigers busy fighting, Gai had to fight him alone with GoZyuJin. However, he easily overwhelmed it with his great speed until Fuuraimaru appeared after ten years absence from Earth, having felt the presence of a space ninja on Earth. He pile kicked Sandaaru Jr backwards and pinned him to a building with it's Binding Shuriken technique. Now defenseless, Sandaaru Jr was destroyed by GoZyuJin's GoZyu Triple Drill Dream.

Satarakura Jr. later returned to destroy the Gokaigers and avenge his fallen friend but was initially destroyed by the Gokai Ultra Ninja Art; Hurricane Scramble. He was then enlarged by Warz Gill only to be killed by Hurricane GokaiOh's Gokai Thunderstorm Attack which marked the ultimate end of the last of the Jakanja.

Before its ultimate demise, it gives birth to the Great Will, which took form of a human child that Yousuke Shiina found and took care of, calling himself Tenkai.

Chunin level Ninja that serve under the Darkness Seven Spears.

"Back To" Ninja Octonyuudou
(deceased) 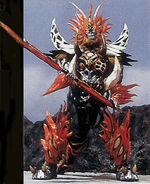 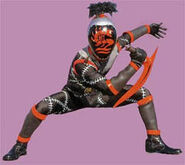