The Space Empire Zangyack (宇宙帝国ザンギャック, Uchū Teikoku Zangyakku) was a powerful interstellar Empire that battled the Gokaigers in order to invade and conquer the Earth, and the universe. It has been claimed several times that Zangyack rules the universe, suggesting that its task is almost complete, with only the Gokaigers in their way.

TV STORY-Ep. 18: The Big Abare with the Dinosaur Robot Drill

Zangyack's forces are a race of aliens who conquered various planets and planned to invade Earth for their emperor, Ackdos Gill. The first invasion failed due to the interference of 34 Super Sentai teams in the Great Legend War. The second, current, invasion was overseen by the emperor's son Warz Gill from his chariot-like flagship Gigant Horse, stationed between Earth and its moon, with an armada at his command.

It is mentioned that among the planets that fell victim to the Zangyack is the homeworlds of all the five main Gokaigers. Ahim de Famille's homeworld Famille is the only one shown and named. Joe Gibken was also a member before he rebelled after being imprisoned for treason.

The currency of the Zangyack Empire is the Zagin (Z=), which is how the bounties on the Gokaigers are measured. The exchange rate from the Zagin to the yen is Z=1 to ¥360, or about $3.35.

After the Gokaigers killed off Warz, the Zangyack made the capture and execution of the Gokaigers their top priority to the point of giving Captain Marvelous an "Unlimited Reward" bounty.

TV STORY-Ep. 39: Why? We're High School Students They were perceived a threat great enough for the emperor himself to come and oversee the invasion personally.

A month after Ackdos Gill's death, as well as the destruction of the majority of their military forces, which had been mobilized to Earth for the final invasion of Earth to exterminate all Earthlings, the Zangyack Empire begins to dissolve with its universal reign coming to an end.

Brajira of the Messiah
(deceased) 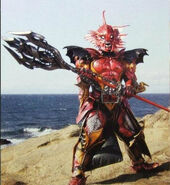 Zangyack appears as the enemies of Kaizoku Sentai Gokaiger: Gathered Transformation! 35 Sentai!. The story of this game involves the Gokaigers going to a planet Navi tells them has the true Greatest Treasure in the Universe. Once the Gokaigers arrive, they're attacked by Zangyack and all the Ranger Keys are lost, scattered across the world.