Space Criminals Alienizer (宇宙犯罪者アリエナイザー, Uchū Hanzaisha Arienaizā) is the classification given to aliens that commit various forms of crime, on Earth and on other planets. They fall under the jurisdiction of Special Police, Dekarangers.

While some Alienizers might work together towards a common goal, or be a part of a criminal organization or family, the majority of Alienizers have been known to work independently from each other. However the majority of them have purchased weapons and Mechanoids from the arms dealer, Agent Abrella.

Several Anaroids were part of an army of past enemy grunts that were fought by the Gokaigers in Los Dark's ghost dimension which housed the 1500 spirits of the villains defeated by the Super Sentai. After losing some of their number in an initial skirmish, the remaining members from each grunt group merged to form the Combined Combatant. Though the stronger opponent, the Combined Combatant proved to be unstable due to internal conflicting among the grunts composing him over who got to finish the pirates off. Taking advantage, the Gokaigers used the Battle Fever J Ranger Keys to destroy the Combined Combatant with the Penta Force cannon.

Later on, Agent Abrella appeared leading an army of Mechanoids, confronting the five Gokaigers. Gokai Red left to take on Los Dark as his crew dealt with Abrella's army as the Dekarangers. Kaizoku Sentai Gokaiger the Movie: The Flying Ghost Ship

and Super Sentai, giving them a hard time. The heroes of recent years were in a pinch until the arrival of a force of Sentai and Rider reinforcements led by Akarenger and Kamen Rider Ichigo

. The combined forces of superheroes were able to turn the tide against the Madou army. They lined up and used their various finisher attacks to destroy the revived monsters. Kamen Rider × Super Sentai × Space Sheriff: Super Hero Taisen Z

Alerted to an illegal landing on Earth, Sen and Umeko arrested three individuals without visas who were assumed to be Alienizers: Shou Ronpo, Hammy and the Anubian-esqe Garu. Taking them into custody at Neo DekaBase, the situation was cleared up when Doggie Kruger arrived; the true wrongdoer turned out to be Mardakko of Jark Matter, whom was defeated by a team up of Fire Squad captain DekaRed, Shishi Red, Hebitsukai Silver, and Space Sheriff Gavan Type G. Space.18: Emergency Dispatch! Space Hero!

The Dekarangers were still fighting Alienizers on Earth for as late as thirteen years following the demise of Agent Abrella. By this time, Marika Reimon's son had entered school, and she continued to fight with her team while raising her child, confiding in her fellow Hero Mamas. Strategy 1: Solved in no time! The Path to Glittering Hero Mama

They are, for the most part, independent agents. However, many of them are provided an arsenal and mecha by the alien arms-dealer Abrella. 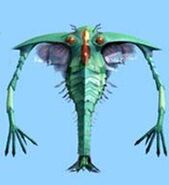 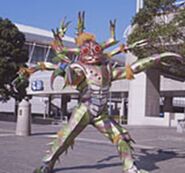 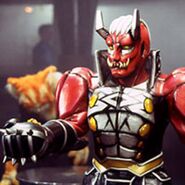 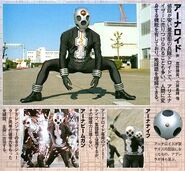 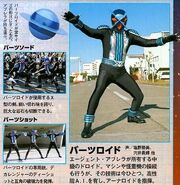 Igaroids
Add a photo to this gallery 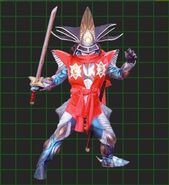 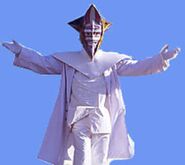 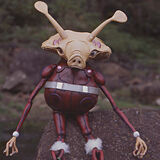