The Psycho Rangers were created as evil counterparts to the Space Rangers.

The evil princess Astronema created them to draw on the power of her master Dark Specter, and they were designed to hunt down the Power Rangers by tracking their energy, voices, and communicator noises. Each Psycho Ranger had a specific fighting style unbeatable by the Ranger that they were evil versions of (though they were a serious threat to the ranger team even without all of their members). The Psycho Rangers consisted of the Blue, Yellow, Pink, Black, and Red Psycho Rangers, with Psycho Red as their leader. In this way, the Psycho Rangers were used by Astronema not only to defeat the Power Rangers, but also to severely weaken Dark Specter, whom Astronema wished to overthrow. As the storyline unfolded, it was revealed that they also had 'monster forms' as well as their Ranger forms, reverting to their more explicit monster state when their Ranger forms were destroyed.

Psycho Pink was the first to become monstrous (by way of becoming a giant), while working with Psycho Yellow to try and attack Cassie, only to be outmaneuvered and overpowered by the Rangers. When TJ realized that the Psychos being perfectly 'programmed' to fight their Ranger counterpart meant that each Ranger could never defeat their Psycho counterpart, the Rangers attempted to take the Psychos by surprise by disguising the entire team as the Blue Ranger, allowing them to eventually catch Psycho Blue on his own and destroy him. Astronema attempted to compensate for this by providing the remaining three Psycho Rangers with vocal recognition programs that would allow them to identify which Ranger was 'their' opponent, but although this attack resulted in the Psychos stealing the Mega Voyager, the Rangers were able to regain the advantage and confront all three monster-formed Psychos in a final confrontation with all three of their megazords.

The spectral forms of the Psycho Rangers were later restored to life again within Secret City, and attacked the Power Rangers. They turned into their monster forms again but remained human-sized. The Rangers managed to digitize them once again, preserving them in several key cards in the hopes that their foes would be trapped and powerless from then on.

Somehow in "Countdown to Destruction," the monster forms of Psychos Red, Blue, and Yellow were seen taking part in the invasions held by the different villains.

In The Power of Pink, Psycho Pink awakens on the Scorpion Stinger and removes Deviot's control device, only wanting to kill the Pink Rangers, not all of the Rangers as Trakeena wants. Entering Terra Ventura's computer system, Psycho Pink reads Kendrix Morgan's mind and learns of the location of the Savage Sword on a nearby planet. After a brief skirmish with Kendrix and Cassie, Psycho Pink travels to Rashon and removes the Savage Sword from a rock. Psycho Pink battles the two Pink Rangers, focusing more on Cassie than on Kendrix. Absorbing energy from Cassie, Psycho Pink is able to heal herself of the damage from the attack that destroyed the other Psycho Rangers and stabs the Savage Sword into Cassie's morpher. Drawing on the energy from the morpher, Psycho Pink turns into her plant monster form and grows to giant size. The Astro Megazord and Galaxy Megazord engage Psycho Pink and the Astro Megazord weakens her with a charged strike from its saber. With Psycho Pink weakened, the Galaxy Megazord destroys her with its own charged up saber strike. However, Psycho Pink's actions result in the death of Kendrix after she sacrifices herself to destroy the Savage Sword.

Psycho Green
Add a photo to this gallery 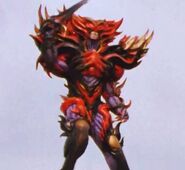 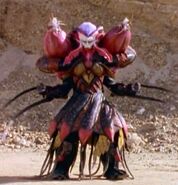 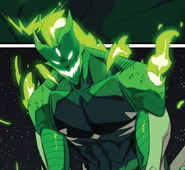 Psycho Green's monster form
Add a photo to this gallery