The Power Rangers aboard Promethea (Terra Venture) are a team of Rangers from various teams recruited by Grace Sterling to save the Rangers Lord Drakkon had depowered. However, not having returned by the end of his defeat, Grace, the powered team of Rangers and the now-depowered Rangers have to make their way back while their powers slowly fade out of existence. 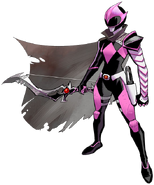