This article is about the team from the Boom comics continuity. For the version from Power Rangers S.P.D., see Omega Ranger.

The Omega Rangers are an ancient faction of Rangers operating in the most dangerous & remote areas of space.

The Omega Ranger ranks have been dormant for centuries until the conclusion of the first part of Necessary Evil, when Jason, Zack, & Trini became Omega Rangers.

TV STORY-Go Go Power Rangers Issue 32 They were tasked by the Blue Emissary with defeating & imprisoning those empowered by leaks from the Morphin Grid. Kiya one of the empowered eventually became an Omega Ranger. Kiya later betrayed the team by killing the Blue Emissary and freed prisoners. So the Omega Rangers received help from the Original Power Rangers to help stop the Anointed Force and destroyed Kiya's morpher and her Zord.

TV STORY-Mighty Morphin Power Rangers (Boom! Studios) Issue 50 The remaining Omega Rangers then encountered The Empyreal and barely managed to defeat them. So they seek Lord Drakkon's help since he may know who they are. But Zordon refuses to hand the Rangers to Drakkon, so they were forced to get him while becoming fugitives in the process.

TV STORY-Power Rangers (Boom! Studios) Issue 1 The Omega Rangers then encountered the Horrid when they entered to an unknown reality, but with the help of Drakkon, they were able to subdue them and left them. 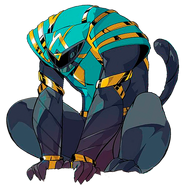