The Mighty Morphin Power Rangers, also known as just the Power Rangers are "teenagers with attitude" that Zordon recruited to battle Rita Repulsa using the power that they wield with their Power Morphers and Power Coins. They developed a strong sense of unity, but whenever one had to move on with his or her life, Zordon appointed new ones to take over.

When Rita Repulsa and her minions were freed from their imprisonment on the moon, Zordon took action to prevent her from taking over the Earth unchallenged. Instructing his childlike robotic assistant, Alpha 5, to recruit "five teenagers with attitude," he chose Jason, Billy, Trini, Kimberly, and Zack to receive the five Power Coins in his possession and become Power Rangers. These five rangers thwarted many of Rita's plots, but nearly met defeat when Rita used a sixth Power Coin to transform Tommy into her own evil Green Ranger. Tommy succeeded in cutting off communications with Zordon and trapping the Rangers' Zords before unleashing his own Dragonzord. However, Alpha was able to restore the Command Center's link with Zordon, who helped bring the Zords back, allowing the Rangers to defeat Dragonzord. Once Jason destroyed Tommy's Sword of Darkness, Tommy was freed from Rita's control, and immediately became a new member of the team.

When Rita Repulsa successfully has her monster trap the Power Rangers into its body, Zordon temporarily recruited Bulk and Skull to be Power Rangers using 'extremely rare' Power Coins. After they successfully defeat the monster, Alpha 5 removes their memories as no one must ever know they were ever Power Rangers.

When Kimberly arrives in St. Moineau, she finds the inhabitants (including her mom and step-dad), transformed into fish monsters by Goldar and a monster called Verto. With the active Power Rangers off of the planet, Zordon issues the Sword of Light to Kimberly to temporarily reclaim her power. Later, Kimberly would use the Sword of Light to disperse her power to Trini and Zack and also to empower two new rangers, Brit and Serge, to become All-New Power Rangers. While the helmets remained unchanged in these forms, the costumes received individualized updates including hoods and pouches and are all accented with pink. 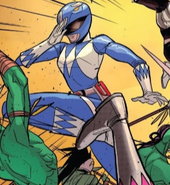 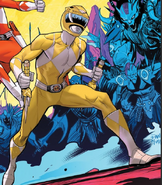