Based at the North Pole where they worship the Omnipotent God, Black Magma intends to have its mechahumans rule the world by using its technology to cause natural disasters and cause global incidents. However, Black Magma targets Japan in order to obtain the cache of geothermal energy there needed to power their arsenal. When, Black Magma recruited two members of the defeated Vader Clan to serve their needs despite their attempted treachery.

Several Machinemen were part of an army of past enemy grunts that were fought by the Gokaigers in Los Dark's ghost dimension which housed the 1500 spirits of the villains defeated by the Super Sentai. After losing some of their number in an initial skirmish, the remaining members from each grunt group merged to form the Combined Combatant. Though the stronger opponent, the Combined Combatant proved to be unstable due to internal conflicting among the grunts composing him over who got to finish the pirates off. Taking advantage, the Gokaigers used the Battle Fever J Ranger Keys to destroy the Combined Combatant with the Penta Force cannon.

Mechahuman creations made by Black Magma, combining animal genes and specialized machinery while infusing the Monger with Black Magma energy. They have an Expansion Program built into them that not only repairs them, but enlarges them into Kyodai Mongers. 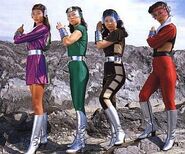