On a peace guarding command center known as the Earth Ship belonging to Sky Force, an international defense agency, scientists developed 'Birdonic Waves.' This waves were advanced technology that gave the subject superhuman abilities. Experiments for the J-Project were successful. Commander Aya Odagiri, the director of the project, chose five elite Sky Force officials from Earth to use this technology. Ryu Tendo, one of the Sky Force officers, was recruited along with his girlfriend Rie Aoi and three others for the J-Project. Ryu was successfully exposed to the birdonic waves, making him the first Jetman. However before the others could go through the process, the Earth Ship was attacked by the menacing force known as the Dimensional War Party Vyram which consisted of Back Dimensional Count Radiguet, Grey, and Tran. The Vyram conquered many worlds in the Back Dimension and they moved on to our dimension to conquer it. Rie fell threw a hole in the ship where Ryu tried to save her, but ultimately failed. Rie fell into space and Ryu presumed her dead, when in actuality, she was captured by Vyram where Radiguet wiped her memory and transformed her into Maria. The Vyram successfully destroyed the ship, and the remaining Birdonic waves, that were to go to Rie and the three other officials, were scattered on Earth, where four civilians Ako Hayasaka, Kaori Rokumeikan, Raita Oishi, and Gai Yuki were exposed to them. Aya and Ryu managed to escape the ship and began searching Japan for the four civilians exposed to the remaining Birdonic Waves to recruit them to be Jetmen in order to stop Vyram. Aya and Ryu managed to recruit Raita and Kaori without any problem. Initially, Ako joined the team because Kaori gave her a check for a large sum of money, but later she returned it and decided to fight anyway. The toughest member to recruit was Gai who did not want to join because he doesn't like other men or taking orders, but eventually he came around.

After the Jetmen lose their birdonic waves to the Dimensional Beast Meteor BEM, resulting in them losing the ability to transform, Supreme Commander Akira Ichijou shows up with his team of warriors, the Neo-Jetmen to replace the Jetmen. Ichijou later locks the Neo-Jetmen in a room with Meteor BEM and tells them to destroy it, or die trying. The team manage to break out of the room and transfer their birdonic waves over to the Jetmen, thus losing their powers and alowing the Jetmen to transform once again.

Near the end of the series, Radiguet implanted a parasite in Maria when she wanted to increase her power which turned her into a vampiric creature. Grey, who was in love with Maria, went to the Jetman for help. Ryu got close enough to hold her tight and told her he would always love her. The parasite left her body where Ryu destroyed it, because Rie was still alive inside Maria and truly loved him. When Radiguet appeared, Rie chose to return to him, only to reveal that it was a ploy to stab Radiguet in the back and kill him without him suspecting. Unfortunately, she was failed to kill him and Radiguet spun around and slew her. Rie refused Ryu's help because she felt that she was a killer and couldn't go back to how things were. Grey appeared and transported her to the ocean where she died in his arms. Ryu went after Radiguet on his own and tried to take him down. When Radiguet was about to kill Ryu, the others arrived to help him. Kaori took a shot that was meant for Ryu, forcing him off the field to tend to her wound. While helping her, she gave him a lecture on his responsibility to humanity and Earth weighing more than personal revenge. Rie's ghost appeared and told Ryu that it was time to let her go. Ryu managed to pull himself together and let go of Rie. Together the five Jetmen, in Great Icarus, battled Radiguet who, after absorbing energy from Majin Robo Veronica, transformed into the giant monster Raguem. Raguem mas majorly thrashing Great Icarus, but the Jetmen managed to kill him by aiming at the wound Rie inflicted on his back, thus ending the Vyram threat.

Three years later, Gai was buying flowers for Ryu and Kaori's wedding, when he saw a mugger stealing a woman's purse. Gai managed to stop the mugger, but was stabbed in the chest. Believing he was going to die, he decided to spend his last moments with his friends. He got to the church too late for the ceremony. When Ryu saw Gai, he asked him if he was alright, but Gai lied saying that he just had too much to drink last night, and wished him and Kaori well. As the others gathered for a group picture, Gai smoked one last cigarette before dying.

Years later, the Space Empire Zangyack invaded Earth. This threat was so great that all of the first 34 Super Sentai, including the Jetmen, were needed to oppose them. Gai was brought back from the afterlife to join his team once more. The 34 Sentai put up a valiant fight against the ground forces, but when the Zangyack fleet itself attacked them, Akarenger told everyone to combine their powers and save the Earth. This destroyed the Zangyack fleet and resulted in the loss of their powers, which resurfaced as Ranger Keys, that were dispersed throughout the universe.

The keys were collected by AkaRed, and later utilized by the 35th Super Sentai, the Gokaigers, a group of five people from different planets who came to Earth in search of the Greatest Treasure in the Universe. Ep. 1: The Space Pirates Appear When Gai won a card game against a goddess, he had her return him to Earth for one day, to help the Gokaigers obtain the greater power of the Jetmen keys so his teammates would not be endangered. Ep. 28: Wings are Eternal After the Gokaigers finally defeated Zangyack, they returned the Ranger Keys before they left Earth to find the second Greatest Treasure in the Universe. It is presumed the Jetmen got their powers back as with all the other Super Sentai. Final Ep.: Farewell Space Pirates

The Jetmen, among the majority of the Super Sentai heroes, were caught up in the "Super Hero Taisen" incident. They were presumably sent to the dimensional rift

, under the pretense of being defeated, by Kamen Rider Decade while he was apparently hunting the Sentai teams. When his and Captain Marvelous' ruse was revealed, Jetman appeared with the other Super Sentai through the dimensional wall

against the alliance of Dai-Shocker

Red Hawk, with fellow Red heroes DenziRed and HurricaneRed, was part of a force of Sentai and Rider reinforcements led by Akarenger and Kamen Rider #1

was destroyed and the battle was finally over, Red Hawk appeared standing on a cliff with all the other heroes who appeared to help, to say goodbye to the heroes of recent years before taking their leave. Kamen Rider × Super Sentai × Space Sheriff: Super Hero Taisen Z

Evidently, the Turborangers loaned their Ranger Keys - at the request of Gai Ikari - to the Gokaigers whom had temporarily returned to Earth to find and bestow the Great King's Credential to the Zyuohgers. Ep. 28: The Space Pirates Return Their powers were returned when the Gokaigers left for space once more having achieved their quest. Ep. 29: The Monarch of the Monarchs

Red Hawk appeared as part of a conference of the first 38 Reds whom addressed the Ninningers and Zyuohgers. Doubutsu Sentai Zyuohger vs. Ninninger: Message from the Future from Super Sentai

Iterations of the Choujin Sentai Jetman existed within the Game World

among a countless complement of recreated Sentai and Rider characters; Yellow Owl participated in the Chou Super Hero Taisen

tournament as part of Team Genm

A delusion of Ryu appeared in Hikonin Sentai Akibaranger during Ep. 6: Take Flight Leader! The Painful Trap of Deluded Photography. He transformed into the Jetmen's Ludicrous Power, the Jet Winger and granted it to Nobuo Akagi.

The five Jetmen appear alongside the other two Ludicrous Sentai, Dekaranger and Jetman, in Season Two's alternate take on the events of the first season. The three official Sentai come to aid the Akibarangers in the final battle with the Stema Otsu Corporation. Ep. 1: Delusional War

The Jetmen later appeared with the now five official Sentai, transforming into their Ludicrous Power which combined with the others to form the Ludicrous Cannon Bazooka, which the Akibarangers used to destroy Kameari Alpaca. Ep. 10: Delusional Pillow Talk

Black Condor
Gai Yuki
Add a photo to this gallery

Green Eagle
Jeffrey Kensaki
Add a photo to this gallery 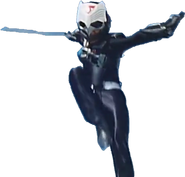 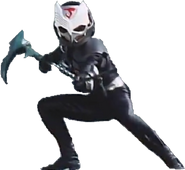 Neo-Jetman 5
J5
Add a photo to this gallery

Birdman
Dan
Ray
Kanna
Add a photo to this gallery

The Choujin Sentai Jetman Ranger Keys (鳥人戦隊ジェットマンレンジャーキー, Chōjin Sentai Jettoman Renjā Kī) are what became of the Jetmen's powers after they along with the rest of the 34 Super Sentai sacrificed their powers to end the Great Legend War.

Any of these keys allow a Gokaiger to assume the form of any of the Jetmen or transform GokaiOh into a firebird to initiate the Gokai Jet Phoenix attack.

Blue Swallow Key
Add a photo to this gallery

The five Jetmen and Great Icarus appear in the Choujin Sentai Jetman video game. In the 5 areas (area 6 is available after winning the first five), you play through with one of the five Jetman and then with Great Icarus against the boss. It also features a "battle mode" allowing the player to battle the bosses of any of the first five levels.

Each Jetman varies interms of weapons and hit points:

The Jetmen are among all the Sentai teams which appear in the arcade game Super Sentai Battle: Dice-O

The Jetmen are among all the Sentai teams which appear in the mobile game Super Sentai Battle Base.

Jetman is among all the Sentai teams which appear in the mobile game Super Sentai Legend Wars.

A
B
G
J
K
N
R
Retrieved from "https://powerrangers.fandom.com/wiki/Category:Jetmen?oldid=904825"
Community content is available under CC-BY-SA unless otherwise noted.