The Invasion Garden Evolien (侵略の園エヴォリアン, Shinryaku no Sono Evorian) are the foes of the Abarangers in the Super Sentai series Bakuryuu Sentai Abaranger. They are the Wicked Life Clan (, Jameizoku), that came from Dino Earth. They dwelled within a castle-like structure, the Invasion Garden Palace, before Dezumozorlya turned it into its final host to battle the Bakuryuu with while evoking another 200 Days of Darkness. The fortress was destroyed when AbarenOh and MaxOhJa seemingly sacrificed themselves (with Ryouga and Yukito inside both respective cockpits), but survived by burrowing underground.

Several Barmia Soldiers were part of an army of past enemy grunts that were fought by the Gokaigers in Los Dark's ghost dimension which housed the 1500 spirits of the villains defeated by the Super Sentai. After losing some of their number in an initial skirmish, the remaining members from each grunt group merged to form the Combined Combatant. Though the stronger opponent, the Combined Combatant proved to be unstable due to internal conflicting among the grunts composing him over who got to finish the pirates off. Taking advantage, the Gokaigers used the Battle Fever J Ranger Keys to destroy the Combined Combatant with the Penta Force cannon. Kaizoku Sentai Gokaiger the Movie: The Flying Ghost Ship

The Members of the Evolian are reffered to as The Dark Sect. They are led by Lije in the service of Dezumozorlya.

The Messengers (使徒, Shito) are 2nd ranked servants of Dezumozorlya, they are master artists who create the Wicked Lifeform monsters using the Tree of Life's berries as the source of their power. Both of them were originally one amoebic entity that split into two and slowly evolved into their current state within the meteor that crashed into the earth that caused it to split into "Another Earth" and "Dino Earth". Thus, the two are most loyal to Dezumozorlya, putting its resurrection above everything else and sometimes compete to receive its favor. After losing Lijewel as a host, Dezumozorlya was intent on getting a stronger host: Bakurenoh. But until then, he reemerged the Messengers into a new puppet host, DezumoVoorla (デズモヴォーラ, Dezumovōra, 47, 48). Both Mikela and Voffa were honored and proud to hold Dezumozorlya's essence in them. DezumoVoorla served to use the evil of humans to revive BakurenOh to serve as Dezumozoryla's new body while absorbing the Earth-Dezumozorlya from Abare Killer's body. But Mikoto managed to kill the Dezumozoryla within him, getting out for BakurenOh to be destroyed by the Bakuryuu. An enraged DezumoVoorla enlarged, only to be killed by KillerOh while Dezumozorlya abandoned his joined-hosts to their death.

A suit of armor from Dino Earth that turns its owner into a monster bent on destroying everything in sight, passing to the one who defeat its wielder. It was because of Asuka that the armor came to Evolien hands by Geildon who defeated him, maintaining his freewill. Jannu succeeded Geilton in wielding the armor before Asuka took it back to save Mahoro. To free him from it, Mahoro reassumed being Jeanne and teamed with Mikoto to take it. However, as Mahoro planned, as Asuka was defeated by two people rather than a sole individual, the armor dissolved once it bounded to Mikoto. By the finale, Dezumozorlya used Asuka and Mahoro's fear of the armor to recreate it as Armored Wicked Life Soldier (鎧の邪命戦士, Yoroi no Jameisenshi), which was soon destroyed by Abare Yellow and Abare Black.

Joined the Evolian on Lije's invitation, who quickly became the official leader of the group. Later on, after the Messenger's scheme identified him as the Another Earth host of Dezumozorlya, learning he was a pawn of the Evolian from the beginning, Mikoto officially defected from the Evolian and decided to focus his attention against the Evolian instead.

Mikoto Nakadai
(Former leader, betrayed, then deceased)
Add a photo to this gallery 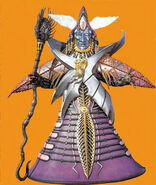 Visionary Messenger Voffa
(Deceased)
Add a photo to this gallery

Dimensional Drifter Galvidi
(Deceased)
Add a photo to this gallery

Plants that produce evil bodies. Growing in the space where there are apostles in the invasion garden, executives produce Trinoids and Giganoids with the fruit of this tree (the fruit of life) as the core. This plant is also a part of Dezumozorlya, and the child who Mahoro was dressed in has one of the souls of Dezumozorlya and becomes a new apostle as a part of it, and shows the power of brainwashing and changing Mahoro Jannu. A similar tree grows in the hometown of the lyre, and the lyre that was integrated with the immortality in episode 43 was taken into the body and fused with him. In order to revive Dezumozorlya, he tries to spread evil bodies around the world and spread the roots of trees all over Japan. The design motif is pea 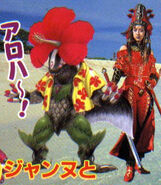 Giganoid 7: From The New World
(Deceased)

Giganoid 11: Inextinguishable
(Deceased)
Add a photo to this gallery

KillerGhost
(Deceased)
Add a photo to this gallery

Hexanoid
(Deceased)
Add a photo to this gallery

Barmia Soldiers
Add a photo to this gallery

A
B
C
D
E
F
G
I
M
N
T
U
V
W
Retrieved from "https://powerrangers.fandom.com/wiki/Category:Invasion_Garden_Evolian?oldid=906934"
Community content is available under CC-BY-SA unless otherwise noted.