""Those with the greatest power shall rise up on their own."That...is what makes a Gangler."
―Dogranio regarding the philosophy of Gangler[src]

The Interdimensional Criminal Group Gangler (異世界犯罪者集団ギャングラー, Isekai Hanzai Shūdan Gyangurā) was a crime syndicate which hails from the Back World. Using the items from the Lupin Collection stored in a safe somewhere on their bodies, the members are able to power up and threaten humans.

Hailing from the Back World, a dimension parallel to the Human World, the Interdimensional Criminal Group Gangler was first formed by Dogranio Yaboon five hundred years ago. Number 1: The Troublemaking Phantom Thief

Dogranio Yaboon shamed the descendant of Arsène Lupin when he seized the Lupin Collection, an assembly of immensely powerful treasures gathered by the legendary phantom thief. He went on to bestow individual pieces of the Lupin Collection to his Gangler Monster followers, Kogure assembled the Lupinrangers to retrieve them on behalf of his master. Number 1: The Troublemaking Phantom Thief

Around the time of Yaboon's 998th birthday in 2017, a Gangler Monster named Zamigo Delma used his power of freezing to cause the deaths of dozens of humans. Among the bereaved were a trio of youths whom were recruited by Kogure, a servant of Lupin's descendant, to become the Lupinrangers and reclaim the Lupin Collection. Number 2: International Police, Chase After Them

Reaching the age of 999, Dogranio was thrown a grand birthday party in which he made the shocking announcement that he intended to retire, promising that the position of his successor would go to the Gangler whom successfully conquered the human world. Number 1: The Troublemaking Phantom Thief

Number 2: International Police, Chase After Them

Number 3: Take Them Back No Matter What

Seizing the New VS Vehicles

Number 6: What to Protect

Seizing a New VS Vehicle and Discovery of Zamigo

Number 9: In Order to Meet Again

A Desire for Fame, Speed, and Haunted Houses

The Trap for the Patrangers and the Lupin Collection's Secret

Number 15: The Work of a Police Officer

Number 16: Because You’re A Friend

Number 18: Secret of the Collection

Number 19: The Price of Disobeying Orders

The Arrival of X

Number 20: The New Thief is a Policeman

Number 25: Make it the Strongest

Number 28: More Fighting On My Birthday

Goche's Experiment and the Aftermath

Number 32: A Request For A Duel

Number 33: We Are The Youth Thief Brigade

Number 37: Your Place to Return

Number 41: A Door to Another World

Number 43: The Man Who Returned

Number 48: The Real Face Under The Mask

Number 49: As A Phantom Thief, As A Police Officer

With its members dead and Dogranio incarcerated, the damage done by the Gangler's reign begins to dissapate, as the world begins to heal. However, several individual monster-of-the-week level Ganglers still remain at large and a new leader shall rise... Number 51: I'm Sure I'll See You Again

Goche Ru Medou
(deceased)
Add a photo to this gallery 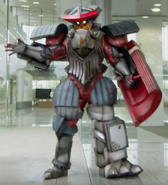 Kazemi
(unknown)
Add a photo to this gallery

Narizma Shibonz
(spy)
(deceased)
Add a photo to this gallery

Black Experimental Body
(deceased)
Add a photo to this gallery

Raimon Gaorufang
(deceased)
Add a photo to this gallery

Goram
Add a photo to this gallery