Galaxy Warriors is a popular intergalactic TV game show where contestants battle to prove who is the most powerful warrior.

It is led by its reigning champion Galvanax and its fights are held in the Warrior Dome. When Brody Romero took the Ninja Nexus Prism which contained the mythical Ninja Power Stars, Galavanax sent his warriors one-by-one to Earth to bring it back to him so he can become invincible and rule the universe.

Cosmo Royale serves as the show's announcer and commentator.

In the Warrior Dome, Cosmo Royale promotes the Ninja Star where whoever wins the competition would be a great warrior like Galvanax. The first fight is between Lavagor of the Extenz System vs. Korvaka of the Ninninger Galaxy. Korvaka easily destroys Lavagor. The Ninja Prism rejected Korvaka and Cosmo Royale offered a trip to the hospital as a consolation prize. Galvanax was not pleased with the outcome.Return of the Prism

Cosmo Royale is shoved aside by Galvanax who declares to the audience that whoever destroys the Power Rangers will be named champion. Cosmo later sends Ripperat to destroy Mick Kanic, Calvin Maxwell and Hayley Foster in order to get the Ninja Steel. After Ripperat was destroyed, Cosmo Royale uses the Gigantify on Ripperat to fight the Rangers upon a unanimous vote from the audience. After Ripperat's final demise at the hands of the Rangers' zords, Cosmo happily tells Galvanax about how well the show's ratings are doing since the Rangers came to be. However, Galvanax doesn't care about the ratings and vows that the Power Stars will be his, which Cosmo nervously agrees with.Forged in Steel

After Sarah Thompson calls Galvanax a "chump" during his, Madame Odious, and Ripcon's confrontation with the Rangers, Cosmo Royale asks the audience what they think of the insult, causing them to boo. As Galvanax didn't want to fight the Rangers right now, he instead summons Slogre to do the job. When Slogre captures the Yellow, White and Pink Ninja Power Stars, Cosmo Royale praises him. After Slogre is defeated by Brody and Preston, Cosmo Royale uses the Gigantify to revive and enlarge Slogre.Presto Change-O

Cosmo introduces Tangleweb to the audience. The monster regurgitates a Kudabot it ate earlier, which Cosmo says is disgusting. When Tangleweb absorbs all five Rangers, Cosmo faints with excitement. When Tangleweb is initially defeated, Cosmo asks the audience if they want to give him a second chance. The audiences votes yes, so Cosmo Gigantifies him.Drive to Survive

When Cosmo reveals Badpipes to the audience, Badpipes uses his power to make Cosmo dance. Later, Cosmo uses the Gigantify Ray on Badpipes after the audience votes yes.My Friend, Redbot

Hacktrack assists Galvanax in his plot to hack Sarah's illusion technology. Due to a unanimous vote from the audience, Cosmo uses the Gigantify Ray on Hacktrack.Hack Attack

Each of the Warrior Dome's contestants sent down by Madame Odius has been defeated by Levi Weston following his escape. When the audience was not pleased with Ripcon's failure, Cosmo Royale unleashed a Skullgator.Gold Rush

Cosmo Royale tells the audience that their latest contestant hasn't shown up until the stage quakes upon Stonedozer's arrival. After Stonedozer gets "between a rock and a hard place," Cosmo Royale asks if they should give him a hand. The audience votes "yes" and Cosmo Royale uses the Gigantify Ray on him.Rocking and Rolling

Cosmo Royale interviews Ripperat's brother Trapsaw who tells Cosmo Royale that he is the self-proclaimed master of traps. Trapsaw tries to get Cosmo Royale to set off his stage trap which doesn't go well as Trapsaw sets it off himself. Cosmo Royale was not pleased that he nearly set off the trap. When the Rangers defeat Trapsaw, Cosmo Royale asks the audience if they should give Trapsaw a hand. The audience votes "yes" and Cosmo Royale uses the Gigantify Ray on him.The Ranger Ribbon

Drillion's latest battle was shown at the Warrior Dome. Instead of Cosmo Royale asking the audience if he should be given another chance with the Gigantify Ray, Galvanax ordered a Kudabot to fire the Gigantify Ray.The Royal Rumble

The Adventures of Redbot

The Rangers succeed in taking out Galvanax, the Galaxy Warriors audience and presumably Cosmo Royale aboard the Warrior Dome Ship. However, Madame Odius becomes the new leader of Galaxy Warriors.Galvanax Rises

Past, Presents, and Future

After Sledge emerges from the wormhole his ship was sucked into and repairs the Warrior Dome ship in exchange for the Super Ninja Steel meteor, Madame Odius has Cosmo Royale begin the new season of Galaxy Warriors.Echoes of Evil

Madame Odius sends out Deceptron and his bolt blaster in her next attempt to get the Ninja Power Stars. When it is revealed that telling the truth was needed to fix the Power Stars, the Rangers proceed to destroy Deceptron. Cosmo proceeds to gigantify Deceptron, leaving him to be destroyed by the Ninja Ultrazord and the Rangers' new Ninja Super Steel mode.Moment of Truth

Madame Odius deploys Spyclops to put a spell on a Ranger to turn them evil, which later becomes Levi. After Levi breaks free of Spyclops' spell, he teams up with Brody to deliver a ninja tornado attack, which destroys her. After being gigantified, Spyclops is ultimately defeated by the Ninja Fusion Zord.Tough Love

Game Goblin begins his plot involving having the students at Summer Cove High School play his self-titled video game so that he would have enough power to destroy the Rangers. Following Game Goblin's failure, Badonna tells Madame Odius that she has booked the Galactic Ninjas for the next episode.Game Plan

Attack of the Galactic Ninjas

The second episode of Galaxy Warriors involving the Galactic Ninjas revolves around Speedwing and his speed star going up against the Rangers. After Speedwing loses his speed star to Sarah and tries to get it back, his star gets stuck on Brody's head. After Brody knocks the speed star in Speedwing, he and the rest of the Rangers destroy him once and then again by the Ninja Fusion Zord and the Lion Fire Megazord, where his ninja medallion is flung to Madame Odius in the process. The Need for Speed

After the Galactic Ninjas' ninja medallions lose power, causing Foxatron to deactivate, Odius recharges the medallions for before reactivating her Zord. Meanwhile, Wolvermean attempts a comeback against Odius by agreeing with her to defeat the Ninja Steel Rangers in the amount of time before the Foxatron charges back up. Wolvermean faces the Rangers alongside Venoma, being defeated once and then retreating, right after Venoma retreated. Wolvermean later returns giant against the Rangers, leading them to activate their newly created Ninja Blaze Megazord against him, fighting against Wolvermean until Odius and her Foxatron intervene and destroy Wolvermean. After his death, Foxatron faces the Rangers and is destroyed their new Megazord. Outfoxed

Madame Odius
(Current)
Add a photo to this gallery

Tynamon
Add a photo to this gallery

Cleocatra
(Deceased)
Add a photo to this gallery

Boneroller
(Current)
Add a photo to this gallery

Venoma
(Deceased)
Add a photo to this gallery 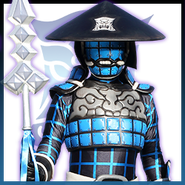 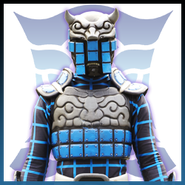 Buzzcams
Add a photo to this gallery

The ship where the Warrior Dome that films Galaxy Warriors is filmed.
Add a photo to this gallery