The Galactic Imperial Army Zone (銀帝軍ゾーン, Ginteigun Zōn), sometimes translated as Silver Imperial Army Zone, is an alien army plotting to rule the entire Milky Way, it flies across the Galaxy attacking worlds with its Galactic Warriors. Earth will be its 1,000th destroyed planet, at which point Meadow will gain eternal life. They operate from their ship Vulgyre and can send smaller battleships called Vulgols (バルゴール, Barugōru). They use the Galactic currency Dolyen (combination of dollar and Yen) which is said to be equal to 100 Japanese yens or around US $.066(the actual exchange rate between the Japanese Yen and the US dollars during the show's initial run in 1990). It was revealed in episode 26 that they also have an upside down day wherein Garoa and the triumvirate are under the authority of the Batzler Soldiers and as well as a Silver Imperial Army Monster.

The Batzler Soldiers were one of five groups of revived Foot Soldiers along with the Grinam Soldiers, Golem Soldiers, Cotpotros and Dorodoros, which were summoned by Zaigan in Emperor Daidas' invasion of Earth. The evil army was wiped out by a gathering of the five Super Sentai: Fiveman, Jetman, Zyuranger, Dairanger, and Kakuranger.

Several Batzler Soldiers were part of an army of past enemy grunts that were fought by the Gokaigers in Los Dark's ghost dimension which housed the 1500 spirits of the villains defeated by the Super Sentai. After losing some of their number in an initial skirmish, the remaining members from each grunt group merged to form the Combined Combatant. Though the stronger opponent, the Combined Combatant proved to be unstable due to internal conflicting among the grunts composing him over who got to finish the pirates off. Taking advantage, the Gokaigers used the Battle Fever J Ranger Keys to destroy the Combined Combatant with the Penta Force cannon. 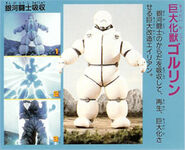