The Warfare Tribe Druidon (戦闘民族ドルイドン, Sentō Minzoku Doruidon) is an evil race of monsters who had attacked Earth during the time of dinosaurs and fought against the Kishiryu and the Knights, before escaping the great extinction by the giant meteor. After 65,000,000 years of drifting, they have returned to Earth to finish off the war they had started. They are led by powerful generals who are themed after chess pieces.

65 million years ago, the Druidon Tribe went to war with the Ryusoul Tribe for dominance over the Earth. Their plan of conquest was interrupted by an approaching meteorite, forcing the entire Druidon Tribe to leave the Earth and drift into space as the meteor struck the Earth and wiped out the dinosaurs. Ep. 1: Que Boom!! Ryusoulger

Returning From The Past Years

The Arrival of Ryusoul Green and Black

Ep. 13: The Prime Minister is of the Ryusoul Tribe!?

Saving Nada From the Gaisoulg Armor

Ep. 32: When The Rain of Hatred Ceases

Nada as a Ryusoulger and The Space Dragon's and Pricious' arrival

Later on, Uden intercepted Towa and Canalo, engaging the two Ryusoulgers and assessing their skills. Before Ryusoul Gold could don his Kurayami armor, Uden used his weapon and warped both Ryusoul Green and Gold into his buckle and takes his leave to find the remaining Ryusoulgers as his cohorts Gachireus and Wizeru looked on.

Uden spotted Koh, Melt and Asuna near an abandoned factory and warped them with a lightning attack from copying Ryusoul Gold's Final Thunder Shot finisher. Inside himself, Uden's manifestations fought each of the five trapped Ryusoulgers, copying more of their techniques until Bamba and Nada found him. Copying Ryusoul Red's attack, Uden unleashed a flame slash at Bamba and Nada, forcing them to transform into Ryusoul Black and Gaisoulg. As his manifestations bested the trapped Ryusoulgers, Uden fought against Ryusoul Black and Gaisoulg, leading them in the empty factory and displaying another copied attack via the DoshinSoul before warping Ryusoul Black in his buckle, leaving Uden alone with Gaisoulg.

As his manifestations chase after all six Ryusoulgers in his inner labyrinth, Uden easily overpowers Gaisoulg, until the seventh Ryusoul knight managed to smash his helmet against Uden's buckle, damaging it at the cost of a fatal stab from Uden's ninjato. From the damaged buckle, Koh managed to escape, causing an energy backlash that temporarily stuns Uden before he shakes it off and executes an energy slash at Koh, who grieves as Nada dies from his wound and transformed his body and the Gaisoulg armor into the Max RyuSoul and Max Ryusoul Changer. After the knight transformed to cancel out the explosion, Uden watched Ryusoul Red transform into Max Ryusoul Red, forcing the Druidon general to remove his mask and go all out.

Uden's strength was futile as Max Ryusoul Red took his strikes and overpowered him with his new form. Becoming enraged, Uden attempted to land a hit until Max Ryusoul Red temporarily incapacitates him with an OmoSoul/HieHieSoul combo attack before finishing him off with the Everlasting Claw finisher, piercing Uden's body and killing the Druidon general. Ep. 33: New Assassin

Ep. 35: The Greatest Battle on Earth

Saden returned to Earth, meeting with Wizeru at the Druidon base. After Wizeru mistook him for the fallen Uden, Saden told his cohort that soon Pricious will rule over the current era and assures Wizeru to ponder on his own future. Leaving Wizeru to ponder, Saden approached Pricious and notes the deaths of Uden and Gachireus, which Pricious expressed his gratitude on the Ryusoulgers' part and revealed they've released the Ryusoul Calibur from the sky temple, which Saden surmised their leader Eras will revive soon. Saden then propose to steal the weapon from the Ryusoulgers, which he and Pricious agreed it leaves the Druidon tribe at a disadvantage as long as the Ryusoulgers possess it before Pricious stated he can get rid of both Wizeru and Kleon now that Saden's here, both unaware that Kleon was watching in secret.

Later on, Saden arrived at the roof Kleon was on and sensed the Ryusoul Calibur's energy, heading down to look for it after asking Kleon where it was while leaving before he could answer, which made the Minosaur creator realized the Druidon generals never looked to him as their equal, prompting Kleon to take the sword for himself. After Kleon found it, Saden demanded the weapon from Kleon, but he refused, prompting Saden to kill him to take the weapon. As Saden backed Kleon in a corner, the Ryusoulgers arrived and stopped him from striking Kleon. Saden then decided to kill the Ryusoulgers as well and summoned the Drunn Soldiers to assist him. Observing the battle, Saden spotted Miya and a filming crew, devising a tactic to have the Ryusoulgers to shield his attacks from them with their bodies. As Ryusoul Red attempted to change into his Max Ryusoul Red form, Saden threw his ninjatō, knocking the Max RyuSoul out of his hand before Saden grabbed his weapon and proceeded to overwhelm the weakened Ryusoulgers.

His tactic failed as Kleon threw the Ryusoul Calibur at Ryusoul Red, allowing the Ryusoulger to transform into his Noblesse form and turn the tables on Saden, overpowering him before finishing him off with an Ultimate Dino Slash. Being weakened by the assault, Saden noted the Ryusoul Caliur's power before teleporting. Ep. 41: Stolen Holy Sword

Eras
Add a photo to this gallery

Gunjoji
Add a photo to this gallery 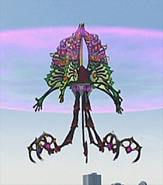 Phantom Minosaur
(deceased)
Add a photo to this gallery

Satan Minosaur
(deceased)
Add a photo to this gallery

Necromancer Minosaur
(deceased)
Add a photo to this gallery

Charybdis Minosaur
(deceased)
Add a photo to this gallery

Drunn Soldiers
Add a photo to this gallery