Demons were monsters that have roamed the Earth for thousands of years and are the main antagonist army in Lightspeed Rescue. Their palace previously stood where Mariner Bay city is built. This is the reason they want to destroy the city, so they can rebuild the palace.

The Demons were said to have ruled the land around Mariner Bay five thousand years ago. They formed a real danger to early humans as they conquered and destroyed everything in their path. Fortunately, a powerful warlock arose and manged seal all the Demons in a tomb, where they remained imprisoned for thousands of years.

Around ten years before the series starts, William Mitchell was involved in a car crash, that would have probably caused his young son Ryan to fall from a cliff. Diabolico managed to spiritually project himself before Mitchell, giving him the choice to either let his son die, or save his life, but giving him to the Demon. Mitchell ultimately chose to let Diabolico save Ryan's life, after which the Demon took the boy with him, inside the tomb, raising him as his own son.

Years later, a group of nomads encounter the tomb in the desert. Hoping to find riches inside, they open the tomb, releasing the Demons inside. The Demons then return to their base in Skull Cavern, after which Diabolico took command and set his sights on destroying Mariner Bay, planning to rebuild their palace there once done. Their plans did not go smoothly however, as the organization of Lightspeed, specifically created to combat the Demons, fought back using their newly recruited team of Lightspeed Power Rangers.

After many failures against the Rangers, Diabolico sends out Ryan Mitchell to steal the newly created Titanium Morpher, hoping to use it against the Rangers. This plan is also fails, as William helps his son realize everything Diabolico told him about the car crash was a lie, making Ryan defect to the Rangers' side.

The Demons are soon after visited by the spiritual apparition of their ruler Queen Bansheera, who tells Diabolico that he should not fail her again, as she will give his much coveted Star Power to her son Impus. Diabolico, having become desperate at this point, sends out his final three monsters, Demonite, Thunderon and Falkar, at the same time. Despite putting up quite a fight, all three of them are also defeated by the Rangers. In one final attempt, Diabolico fuses his three monsters, but this fused monster is also destroyed by the Rangers' new Battle Boosters. Out of other options, Diabolico decides to take on the Rangers personally, but is destroyed by the Battle Boosters and the Lightspeed Solarzord.

His Star Power then transfers to Bansheera's son Impus, who evolves into an adult form named Olympius. Olympius, being the prince, tries to take over the leadership of the Demons, but is not taken seriously by the other generals, Vypra and Loki, due to his young age, and lack of experience.

Not long after Olympius' ascend, the Demons manage to partially restore Queen Bansheera's physical form. Due to the Rangers' interference, the queen could not be fully restored, resulting in her body being deformed. Olympius, angry that the Rangers caused his mother to be in such a state, expresses he wants to destroy them for this.

However, as Olympius' success rate is about as high as Diabolico's, Bansheera loses her patience and wants to put Vypra and Loki in charge. Olympius, overhearing this conversation, does not take kindly to this and attempts to destroy the two other Demons. The others survive this attempt and decide to take action against the Demon prince. To do so, Vypra manages to revive Diabolico from the spirit world. The trio then start planning behind Olympius' back.

Prince Olympius attempts to trap the Power Rangers in the Shadow World, But Diabolico banishes the demon prince in the dimension. When Queen Bansheera hears that her son is banished in the dimension, she decides to let him rot there and puts Diabolico in charge of the Demons. Unbeknownst to them, Jinxer works together with Olympius and managed to release the Demon prince from the Shadow World. Using a hypnotized captain Mitchell, the duo taps energy from the Lightspeed Aqua Base, allowing Olympius to take on a new form. Through tremendous effort, the Rangers defeat Olympius, leaving heavily injured, but still alive.

Not long after, queen Bansheera's transformation is nearly complete. To complete her final form, she absorbs Vypra, killing her in the process. During a battle against the Rangers, she orders Diabolico to sacrifice Loki in an attempt to destroy the Rangers. This leaves Diabolico disillusioned with his queen, prompting him to tell Carter about her weak spot. Carter seemingly manages to destroy the queen, but she is revealed to have survived.

Bansheera is soon rejoined by Olympius, who succeeded in capturing the rogue Diabolico. The queen brainwashes Diabolico and increases the power of both Olympius and Diabolico, turning them into Super Demons. The Super Demons utterly destroy the Lightspeed Megazord, the Supertrain Megazord and the Max Solarzord, but are destroyed themselves by the newly completed Lifeforce Megazord.

This victory is short lived, however, as Jinxer placed a Batling card on the Lifeforce Megazord, releasing hordes of Batlings in the Lightspeed Aquabase. The footsoldiers Hijack both the Omega Megazord and the Lifeforce Megazord. The Omega Megazord is being used to prepare a Demonic ritual that would allow Bansheera to release every fallen Demon from the Shadow World back onto Earth, while the Lifeforce Megazord starts wrecking the Aquabase. The Rangers manage to escape the Aquabase and destroy both Megazords. They then assault the Skull Cavern, interrupting the ritual. Carter then kicks Bansheera back into the tomb, banishing the queen back into the Shadow World. When the queen tries to take Carter with her, she is attacked by the vengeful spirit of Diabolico, allowing Carter to escape.

Around a year later, Vypra is revealed to have somehow survived. She plans to use a magical crystal to summon the Super Demon Quarganon. Working toghether with Ransik and his Mutants, Vypra succeeds in summoning Quarganon, but both demons are quickly destroyed by the combined forces of the Lightspeed and Time Force Rangers.Their combined teamwork and this one move, Carter and Wes eliminated the threat posed by Queen Bansheera's Demons once and for all. 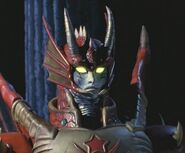 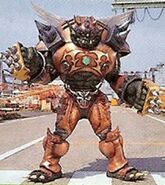