The Deboth Army (デーボス軍, Dēbosu Gun) are a horde of alien monsters who were born from the cells of Dark Species Deboth, a lifeform created by the Creator Devius.

Some time during the beginning of the known universe, an entity known as Deboth wandered the cosmos and brought with him mass extinction on various worlds with the aid of heralds created from his cells: Chaos and Torin were sent to Earth to oversee the extinction of the dinosaurs. While there, Torin gets a change of heart and instead allies himself with the Zyudenryu to fight his creator.

Coming to Earth to destroy it personally, Deboth ends up with his heart damaged during his fight with the Zyudenryu before his body was frozen in ice. However, despite their creator's defeat, Chaos remained active and used Deboth's cells to create servants at certain events in human history to exact revenge on Torin while attempting to revive Deboth though the emotional energies that humans emit.

By the present day, Chaos is able to thaw out a fully amassed army with the intent to finally thaw Deboth's frozen heart and herald a new extinction era on Earth's current dominant lifeform: humans.

In the year 2114, the Deboth Army has risen once again, but a new team of Kyoryugers have risen their flags to fight them once again. they were eventually destroyed

Taken from the memory of Gokai Red, a recreation of Transcendenterfly God Deboth was brought forth by Bangray among a collection of the most nefarious adversaries faced by the Super Sentai. Overwhelming Gokai Red and Zyuoh Eagle initially, Bangray's forces were matched when the Gokaigers and Zyuohgers joined their respective Red warriors. Engaging the remaining five Zyuohgers alongside "Brajira of the Messiah", "Deboth" was defeated by their combined Zyuoh Slash.

Captain Marvelous had evidently followed the exploits of the Kyoryugers to be aware of Deboth, whom he had not been shown to encounter on-screen beforehand.

A pack of Zorima led by Raimein were among the Shocker

bonus stage. This army was ultimately wiped out by a combined force of Sentai Rangers and Kamen Riders. 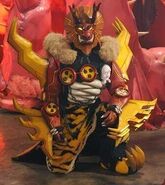 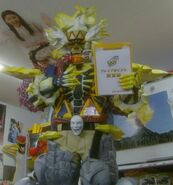 All Deboth Army members were designed by character designer K-SuKe with one exception, Debo Akidamonne, who was designed by Momoka Murata.