"Human Rangers are no match for Cyborg Rangers. You will all be terminated!"
―Red Cyborg Ranger talking to his creator.[src]

When the Lightspeed Rangers reported to the Aquabase after facing a demon named Striking, General McKnight informed them that the Cyborg Rangers were their replacements. They were stated to be ten times stronger than the original team. The cyborgs fought Striking and were about to finish him off when he threw a lightning attack that caused the Cyborg Rangers to malfunction and go on a rampage. The original Rangers had to use their blasters to destroy the cyborgs. 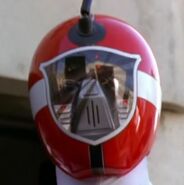