The Black Mighty Morphin Ranger Army was a temporary team consisting of Black Mighty Morphin Power Rangers from across time and space, including alternate realities and timelines. These Rangers were summoned and formed into a team via distress call and teleportation by an Adam Park from an apocalyptic future alternate timeline where Rita Repulsa had destroyed most of the Power Rangers with a powerful monster.

While being pursued by the Crystal Cryptid, Adam was sent on a mission by Alpha 5 to a hidden chamber to connect his Power Crystal to a special transmitter and teleporter directly connected to their world's Morphin' Grid. Adam uses the crystal to activate a distress beacon to find and teleport any Ranger across space and time to his world that wielded the Black Ranger powers. Adam explained his situation via the SOS call during their transit to his world and the Black Rangers morphed and aided Adam. Using their combined powers, they destroyed the Crystal Cryptid and recovered the lost Power Crystals of Adam's fallen comrades inside its body. After a brief talk with each other and Adam reminding them about knowing too much about timelines and thanking them, the multiple Zacks and Adams (and one female version of Zack) parted ways. Before leaving, Zack from the main Boom! timeline thanked Adam for renewing his confidence that good can prevail even in the most hopeless of situations. Adam watched him leave as he planned to rebuild his world. 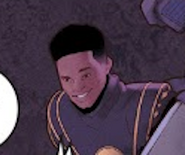 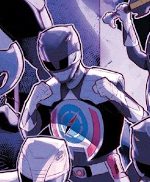 Adam Park (Once a Ranger) 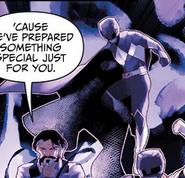 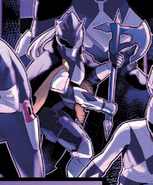 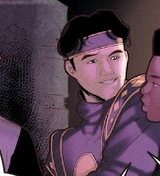 Adam (MMPR Movie universe)
Add a photo to this gallery

A
B
S
T
Z
Retrieved from "https://powerrangers.fandom.com/wiki/Category:Black_Mighty_Morphin_Ranger_Army?oldid=854559"
Community content is available under CC-BY-SA unless otherwise noted.