Originally thought to be the last of their kind, the three Pollution Ministers ended up on Earth, known to them as the Human World, and decide to pollute it to serve as an ideal paradise for them. To that end, the Pollution Ministers uses the Deus Haguru Magear (デウス・ハグル・マギア, Deusu Haguru Magia), a big gear Yogostein brought with him, to create Hellgailles Palace (ヘルガイユ宮殿, Herugaiyu Kyūden) on an isolated island in the middle of the sea. But over time, it is revealed that the Gaiark's more powerful members have been acting on other Braneworlds. After the defeat of Yogoshimacritein and his forces, the remaining Gaiark exist within Gunman World.

Crime Minister Yogoshimacritein was revived as a general of the Black Cross Army under the Black Cross King, taking on the title Crime Minister Yogoshimacritein of the Black Cross (黒十字の総裏大臣ヨゴシマクリタイン, Kuro Jūji no Sōridaijin Yogoshimakuritain), with an army of Ugatz under his command. He battled Gokai Yellow, Gokai Blue, Gosei Black and Gosei Yellow but he was defeated by their combined efforts. He was resurrected by Black Cross Colossus in the giant battle and summoned the phantoms of Gaiark members Chirakasonne and Kireizky. They were destroyed with the other villains by the mecha of the 35 Super Sentai. Gokaiger Goseiger Super Sentai 199 Hero Great Battle

Several Ugatz were part of an army of past enemy grunts that were fought by the Gokaigers in Los Dark's ghost dimension which housed the 1500 spirits of the villains defeated by the Super Sentai. After losing some of their number in an initial skirmish, the remaining members from each grunt group merged to form the Combined Combatant. Though the stronger opponent, the Combined Combatant proved to be unstable due to internal conflicting among the grunts composing him over who got to finish the pirates off. Taking advantage, the Gokaigers used the Battle Fever J Ranger Keys to destroy the Combined Combatant with the Penta Force cannon. Kaizoku Sentai Gokaiger the Movie: The Flying Ghost Ship

and Super Sentai, giving them a hard time. The heroes of recent years were in a pinch until the arrival of a force of Sentai and Rider reinforcements led by Akarenger and Kamen Rider #1

. The combined forces of superheroes were able to turn the tide against the Madou army. They lined up and used their various finisher attacks to destroy the revived monsters. Kamen Rider × Super Sentai × Space Sheriff: Super Hero Taisen Z

Yogostein, Kitaneidas, and Kegalesia, after ending up in the Sanzu River and Makuu Space, were eventually rebuilt by surviving Ugatz members in 2015. The Three Ministers, not seeing the point of taking over the Human World, decide to colonize Junk World and create their utopia there while indirectly helping the humans by taking their garbage. But one pile of electronics suddenly assembled into Noizoon, the first of the Eleki Clan Zontark who created Grayzky as they enslave the Gaiark before departing to the Human World to enact plan to turn Earth into their utopia by sealing it from the other dimensions and use the N-chips they force the controlled Ugatz to manufacture to convert all humans into Zontark Children. The ministers eventually met and team-up with the Go-Ongers to stop Noizoon's plan, with Kegalesia briefly transformed into "Kega Yellow" to aid in rescuing Saki after se was converted into a Zontark Child.

Pollution President Babatcheed
(deceased)
Add a photo to this gallery 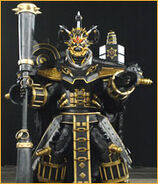 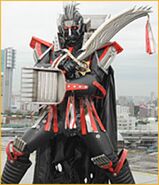 Cleaning Minister Kireizky
(deceased)
Add a photo to this gallery 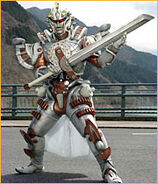 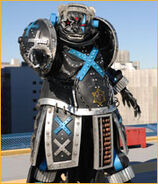 Danger Cabinet-Director Chirakasonne
(deceased)
Add a photo to this gallery

Dumbbell Banki
(deceased)
Add a photo to this gallery

Bin Banki/Mahobin Banki
(deceased)
Add a photo to this gallery

Drill Banki
(deceased)
Add a photo to this gallery

Kettei Banki
(deceased)
Add a photo to this gallery

Rairaiken
(deceased)
Add a photo to this gallery

Barbaric Dohma
Add a photo to this gallery