The Bandora Gang (バンドーラ一味, Bandōra Ichimi) are Witch Bandora's forces and apparently Earthly in origin as part of ancient mankind. They are merciless (but hilarious) minions of darkness who were sealed away on the planet Nemesis for causing evil to mankind.

After Bandora's son, Kai, was killed by a dinosaur, Bandora sold her soul to Dai-Satan to grant her power so she could seek revenge on dinosaurs and the humans allied with them. She started a war that eventually led to the extinction of the dinosaurs, but she and her minions were sealed away on the planet Nemesis. 170 million years later, astronauts landed on the planet Nemesis, and freed her and her minions Grifforzer, Pleprechaun, Totpat, and Bookback. Bandora and her minions were located at the Bandora Palace on the moon where Pleprechaun made Dora monsters and Bandora observed events on Earth from her telescope. They were eventually joined by Grifforzer's wife, Lamy, and formed a temporary alliance with Burai. After the defeat of Dai Satan, and Bandora's son, Kai, died again. Because Bandora shed tears, she lost all her magic and she and her gang were sealed away again by Daizyujin and thrown into space. Though sealed, they found some content in their imprisonment, especially after Grifforzer and Lamy had a child, whom Bandora doted on.

The Golem Soldiers were one of five groups of revived Foot Soldiers along with the Batzler Soldiers, Grinam Soldiers, Cotpotros and Dorodoros, which were summoned by Zaigan in Emperor Daidas' invasion of Earth. The evil army was wiped out by a gathering of the five Super Sentai: Zyuranger, Fiveman, Jetman, Dairanger, and Kakuranger. Super Sentai World

Several Golem Soldiers were part of an army of past enemy grunts that were fought by the Gokaigers in Los Dark's ghost dimension which housed the 1500 spirits of the villains defeated by the Super Sentai. After losing some of their number in an initial skirmish, the remaining members from each grunt group merged to form the Combined Combatant. Though the stronger opponent, the Combined Combatant proved to be unstable due to internal conflicting among the grunts composing him over who got to finish the pirates off. Taking advantage, the Gokaigers used the Battle Fever J Ranger Keys to destroy the Combined Combatant with the Penta Force cannon. Kaizoku Sentai Gokaiger the Movie: The Flying Ghost Ship 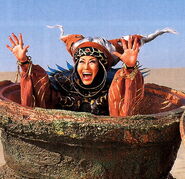 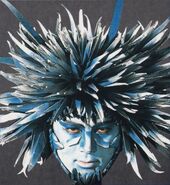 Dai-Satan (deceased)
Add a photo to this gallery

Lamy (inactive)
Add a photo to this gallery 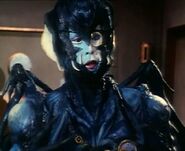 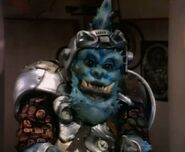 Dokiita Golems
Add a photo to this gallery

The Bandora Gang appear as the villains of the Kyoryu Sentai Zyuranger video game. It is a side-scrolling action game in which the player takes control of a different Zyurangers in each of the game's five stages. At the end of each stage, the player will confront one of the main villains from the show. The villains faced are Pleprechaun, Totpat, Bookback, Grifforzer, and Bandora herself.