The Automaton Dominion are a group of robotic villains in the Power Rangers universe, who first appeared in the Boom! Studios comic book series, Mighty Morphin. Their leader King Aradon is the father of Archerina and father-in-law of Gasket of the rival Machine Empire faction.

After the Eltarian War in Mighty Morphin (Boom! Studios), after the damage the Eltarians have caused on Earth and the destruction of the Command Center of Earth, King Aradon takes the immediate advantage of the damage, and sent scouts to the Command Center's ruins. From there, his scouts ambushed the Red Ranger that was defending it until the Green Ranger stopped the ambush.

COMIC STORY- Mighty Morphin (Boom! Studios) Issue 17 He then came to Earth, proclaiming his sovereignty of Earth through a broadcoast message that Promethea received.

After he and his general Count Karnakus landed on Earth and destroyed the forcefield protecting the Command Center, they were greeted by the Green Ranger Matthew Cook who King Aradon mistook as Rita Repulsa's emissary. King Aradon said he may spare the Green Ranger's life if Matthew allowed King Aradon to destroy Zordon, which Matthew declined, and the two engaged in battle. After the EMP from the piezoelectric generator that Matthew got from Promethea failed to work on King Aradon from his Dragon Dagger, Red Ranger Rocky assisted the Green Ranger in battle.

King Aradon was mentioned by Zordon to the Zeo Rangers but was never actually seen in Power Rangers Zeo. Also, his deeds were never specified. It can be assumed that he no longer has any contact with his daughter after she eloped with Prince Gasket. 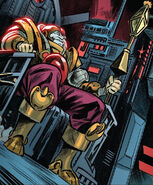 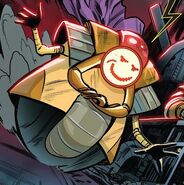