Strengthening Suits (強化スーツ, Kyōka Sūtsu): The powered suits worn by the Zyurangers after activating the Dino Buckler. The helmets are patterned after the Zyurangers' respective Guardian Beast, while the boots, gloves, and chest have a diamond pattern. The helmets are made of Zyu Metal (ジュウメタル, Jū Metaru), while the rest of the suits are made of Zyu Metal Fiber (ジュウメタルファイバー, Jū Metaru Faibā), which is obtained by fiberizing Zyu Metal. The suits can withstand 2000° of high heat and low temperatures of minus 180°. In addition, DragonRanger's suit, compared to the core five's, enhances the user's strength enough to destroy a single tank with bare hands by hurling it. The gloves and boots have golden rings around them, while the red stone fitted on the helmet is made by the same material as the Dinocrystals and it can send instructions of the transformation and combining of Dragon Ceasar by the resonance of Zyusoken's sound.

The Ryugeki Sword (龍撃剣, Ryūgekiken, lit. "Dragon Fierce Sword") is the legendary weapon of TyrannoRanger Geki. It forms the targeting sight of the Howling Cannon and is able to fire energy blasts at an opponent when its wielder focuses their power into it.

The Trice-Lance (トリケランス, Torikeransu) is Dan's legendary weapon which can be wielded as a double trident or a pair of short spears. When separated and shortened, they form the inner barrels of the Howling Cannon.

The Saber Daggers (サーベルダガー, Sāberu Dagā) are Boi's legendary weapons which can be used in either melee combat or thrown as projectiles. They form the outer barrels of the Howling Cannon.

Even among the Legendary Weapons, the Ptera Arrows are notable as being supremely legendary for being able to break various curses, such as the legend of Lithia Tribe hero Lithiantheus using them to defeat the threat of the Golden Apple empowered Ladon.

The Zyusouken (獣奏剣, Jūsōken, lit. "Beast Play Sword") is a short sword that was given to Burai by Clotho, the spirit of Life, which became his signature weapon after his redemption caused the Sword Hellfriede to disintegrate. Unlike the other Legendary Weapons, the Zyusouken has no civillian form.

In addition to combat, the Zyusouken can be played as a flute whose songs are used to command Dragon Ceasar, to activate extra protection from the Dragon Armor, or simply played recreationally. Burai could also use it to teleport himself back and forth between the Lapseless Room and wherever a battle was taking place. The Zyusouken could also fire a powerful energy blast by crossing the Zyusouken with either Hellfriede or the Ryuugekiken.

Saurer Machines: The Zyurangers own three special motorcycles. Each uses a Suzuki GSX-R400R as the base model. 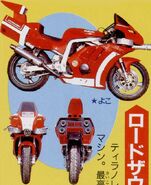