The following is a list of all the weapons and vehicles in the Zeo Rangers' arsenal.

This page lists all the weapons, devices, and vehicles used by the Zeo Rangers. Below is the inventory, which also reflects on the Zeo series page as well as the team page of the Zeo Rangers.

The Zeo Crystal is the source of the Zeo Rangers' powers. It was split into five sub-crystals. The Zeo powers gave access to several energy-based attacks (often preceding or following attacks with their energized Zeo Power Weapons). Kat had the Zeo One Pink Fire Cloud (where a cloud of energy surrounded her, which she then compressed into a sphere and fired at an enemy), Tanya had the Zeo Two Power Kick, Rocky had the Zeo Spinning Power Punch/Zeo Three Power Spin (where he would leap into the air, spinning around to form a sphere of energy around himself, before launching forward at a target), Adam had the simply-named Power Punch (where his fists would be energized, allowing him to hit his opponents with a flurry of energy fists), and Tommy had the Zeo Five Power Kick. The entire team had the Zeo Spinning Power Kick, where they would leap into the air, spinning around rapidly (akin to Rocky's power spin attack), forming into energy spheres that would then combine into one; the combined blast would head for a monster and destroy it.

The Super Zeo Gems gave the Zeo Rangers access to the Super Zeo Zords. It is unknown who created the gems or how they got into Trey's possession but they could only be activated by the power of the Gold Ranger's Golden Power Staff and immediately began to form the Rangers' new zords.

The Wrist Communicator is a watch-like device used by the Zeo Rangers to communicate with one another, the Power Chamber and for teleportation usage as well.

The Zeo Laser Pistols are the standard sidearm of every Zeo Ranger, and can fire a concentrated beam of red energy at opponents, but, at times, the color beam it fires is dependent upon the color of the Ranger using it. The Super Zeo Zords had enlarged versions of the Advanced Zeo Laser Pistols. A Zeo Laser Pistol is seen twenty four years later in the Beast Morphers episode "The Evox Snare" in Grid Battleforce's vault.

The Zeo Power Pod Swords are collapsible sword-like batons used by every Zeo Ranger. They were not used as often as the standard power weapons, but were great for attacking lesser monsters. The baton itself is extended from the hilt, and remains inside until the ranger decides to use it.

The Zeo Laser Pistols can be combined with the Zeo Power Pod Swords into a rifle-like configuration called the Advanced Zeo Laser Pistol. These were able to fire very powerful red/pink lasers strong enough to destroy Quadrafighters with single hits but only actually destroyed a single monster, the Pollenator which was only done when an "oxygen field" was equipped given pure oxygen was his only weakness. 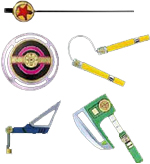 Each Zeo Ranger possesses an individual weapon, which can be summoned from their visor shapes. They can also be powered up for a stronger attack. Zeo Rangers II-IV possess two of each weapon. The Super Zeo Zords also possess enlarged versions of these individual weapons to use.

A circular shield wielded by Zeo Ranger I, Pink. The Disc acts as a shield, and is very durable, but cannot withstand higher level energy blasts for long. It can also be used as a hand to hand weapon. It latches onto the top of the Advanced Zeo Laser pistol for the Zeo Blaster formation.

A pair of threaded clubs wielded by Zeo Ranger II, Yellow. The Clubs act as blunt weapons, but can also be used in a way similar to nunchakus. One club attaches to the sides of the Advanced Zeo Laser pistol for the Zeo Blaster formation.

A pair of bladed tonfa wielded by Zeo Ranger III, Blue. The Tonfas are used for close combat, but can also be thrown as projectiles. The tonfas are almost always used simultaneously, but only one can be attached to the top of the Advanced Zeo Laser pistol for the Zeo Blaster formation.

A pair of Axes wielded by Zeo Ranger IV, Green. The Axes can extend to a degree, and like the clubs and tonfas, are always used simultaneously. Only one Axe can be attached to the bottom grip of the Advanced Zeo Laser Pistol for the Zeo Blaster formation.

A short sword wielded by Zeo Ranger V, Red. The Sword itself is mostly black at the handle with a short blade, and a Red Star emblazoned upon the hilt. It attaches to the gauge at the bottom of the Advanced Zeo Laser pistol for the Zeo Blaster formation. Aside from melee damage, it has been shown to fire an energy beam from the star on its hilt.

Similar to the Power Blaster from their original powers, the Zeo Rangers are capable of combining their individual weapons, mounted onto an Advanced Zeo Laser Pistol, to form the Zeo Blaster. The Zeo Blaster is an enlarged firearm channelling the power of all five combined weapons into the Advanced Zeo Laser Pistol for a powerful attack capable of defeating monsters.

In spite of this, it was only ever used twice, once in the episode "Graduation Blues to kill the Hydro Contaminators and once in the third part of the three part episode "There's No Business Like Snow Business to kill the Defoliator. This was due to cutting other appearances from Ohranger (such as it's first use against Bara Saucer who was adapted as the minor Hosehead monster).

The Golden Power Staff is the weapon of Gold Ranger, Trey Of Triforia. It is used in close-combat attacks as well as its capabilities of firing a laser from a small area on top of the logo. When Trey temporarily tranferred the Gold Powers to Jason Lee Scott the second Gold Ranger, this became both a weapon and a Morpher in his case.

The Zeo Cannon wields the power of all five Zeo Rangers and fires a powerful paralyzing blast at the opponent. The weapon is so enormous that it requires all five rangers to aim. The design of the Zeo Cannon appears to mimic that of the Red Battlezord. It is fueled by five "Zeo Power Cells", which are loaded into a tray which slides into an inner chamber.

The Jet Cycles work for the Zeo Rangers the same way as the Shark Cycles did for the Mighty Morphin Rangers, but with a design unique to each color of ranger. They premiered in Episode 7, Every Dog Has His Day, and were used later on whenever the teleportation system was not an option. The Zeo Jet Cycles were created through the combined effort of Billy and Alpha 5. The Zeo Jet Cycles were destroyed in Rangers of Two Worlds Part 1 in an ambush by Cog Changer, who took control of the Cycles in an attempt to destroy the Zeo Rangers.

A Gold Ranger version of the Zeo Jet Cycle toy was released by Bandai of America, but no such vehicle appeared in the show.

Traditionally used by Tommy Oliver, the Defender Wheel was developed by Billy Cranston and Alpha 5 as an addition to the Zeo Rangers' arsenal that was stored in Zeo Zord V when not in use. The Defender Wheel would be launched against a monster with Tommy inside it, generating a powerful burst of energy that could destroy normal-sized monsters. It was used a few times against normal sized monsters and a giant Fortissimodo, but proved to be ineffective, more like a bee sting than anything. Although commonly used by Tommy, Rocky DeSantos once used it against Defector when he blamed himself for allowing the monster to get close enough to the Rangers to attack them. It was also the only time it successfully destroyed a monster.