The Animal Crystals are golf ball size spheres that are transparent and have a model of a Wildzord inside. To summon the Wildzord from the Animarium, the crystal would be placed in the Crystal Sabers and the Rangers would say, "Wildzords, descend." When Max, the Blue Ranger was chosen, the Shark Animal Crystal appeared in his pocket after Alyssa and Taylor saved him from an Org. Cole had his Animal Crystal since he was a baby but remained empty until he became the Red Ranger. Also, if the Wild Zord is destroyed, so is the crystal. 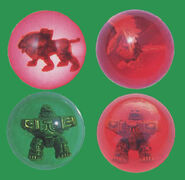 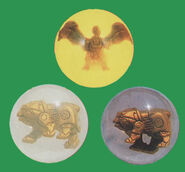 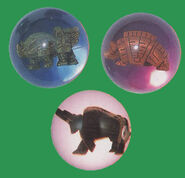 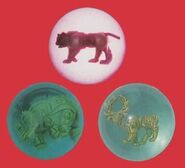 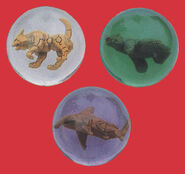 Each Ranger has claws on their gloves, for quick short range attacks in close combat. However, these are rarely used in favor of their other weapons.

The Yellow Ranger's primary weapon. It is a yellow stylized-handled sword with a medium blade. It has Soaring Darts -feather shaped darts - contained within the hilt. It forms the upper blade of the Jungle Sword. Its main attack is the Soaring Slash where Taylor energizes it with gold-yellow energy and performs a powerful double slash across the screen.

The Black Ranger's primary weapon. It is a black stylized handaxe with two blades. It forms the lower blade of the Jungle Sword. Its signature attack is Bison Slash where Danny charges his Bison Axe up with purple energy and performs a devastating horizontal slash.

The Red Lion Wildzord gave the Red Lion Fang the ability to transform into the Lion Blaster, which has a Gatling Mode and a Cannon Mode. The Lion Blaster's cannon mode serves as a finisher, firing a devastating wave of red energy strong enough to defeat the Tombstone Org at normal size. The gatling mode was weaker but was still strong enough to cripplingly injure Freezer Org.

The Lunar Wolf Ranger's personal weapon, capable of switching between Saber Mode, Sniper Mode and Break Mode. With it, Merrick can perform the Full Moon Slash where he charges it up with blue energy from a moon he generates behind him and slashes it into the monster to devastate opponents. Its finishing attack is the Laser Pool where he swings his Lunar Cue horrizontally, generating a massive green energy "pool table" that seals around the monster's waist and traps them in place, He would then place his Animal Crystals on the table and shove them forward with his Lunar Cue, slamming into the monster and obliterating them. This was strong enough to defeat the Quadra Org and the Toy Org with one hit. He could also use this technique to summon his Wildzords by shoving them into the sky to form the Wild Force symbol which would make them come to him..

Cole's weapon that can serve as a blaster or bow, and is also used to summon the Red Falcon Wildzord (when Cole's Crystal Saber is docked within it). Its final attack is when it switches into Archer Mode and fires a massive red energy wave reminiscent of the Giraffe Spear finishing move. It was strong enough to kill Super Nayzor with one hit. 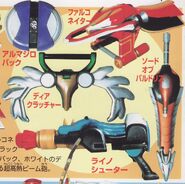 The Animarium Armor is used by Cole Evans, the Red Lion Ranger. When armored, Cole is known as the Red Savage Warrior. This is his personal Battlizer and its finishing move is the Falcon Blast, a massive blast of red energy from the wings capable of defeating Super Toxica and Super Jindrax. The Animarium Armor was obtained in the episode The Wings of Animaria, during which Cole defended Turtle Cove singlehandedly against the Orgs while the other four Rangers were trapped in a collective dream controlled by Animus, only able to free themselves if they could solve a puzzle. When the puzzle was solved, Cole obtained the Animarium Armor and the Falcon Summoner, which was used to summon the Red Falconzord (the Falconzord and the Animarium Armor are very similar in design).