This page lists all the weapons, devices, and vehicles used by the ToQgers. Below is the inventory, which also reflects on the ToQger series page as well as the team page of the ToQgers. 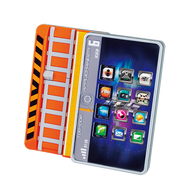 The ToQ Ressha (トッキュウレッシャー, Tokkyū Ressha) are small versions of the ToQgers' Ressha that are inserted into the ToQger's weapons as well as the ToQ Changer and the Applichanger.

The Zyudenchi (獣電池, Jūdenchi, Beast Batteries) were temporarily used by the ToQgers as an alternative to the ToQ Ressha, exchanging them with the Kyoryugers to effectively combat the Deboth Army during the emergence of Creator Devius.

The Rainbow Pass (レインボーパス, Reinbō Pasu) are special cellular-like devices that all of the ToQgers have, functioning as their belt buckles and communicators. It also allows them to board onto the Ressha, for which it would be impossible to enter without. Also, they can be used like credit cards to access Wagon's concession cart or to purchase items anywhere they journey to. However, also like a credit card, the funds are not without a catch: they have to repay the money they had spent on non-returnable items (like food) by performing chores on the train. The Rainbow Passes also hold their memories as ToQgers, if they get destroyed, or burned, the ToQgers may return to being children and lose their memories as ToQgers.

In the ToQger vs. Gaim Special, Narutaki

, allowing him to enter the Ressha, who then gave it to Mai to try to get her out of Zawame City. Given the fact the Rainbow Passes are the paper passes that Right and the others all used as kids, it's unknown how Narutaki gained one.

Wagon has a personal Rainbow Pass in the same shade of purple her body has, which she uses to snap pictures of herself. 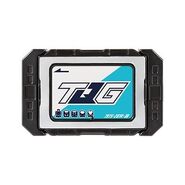 The Revolving Gun-Sword ToQ Blaster (回転銃剣トッキュウブラスター, Kaiten Jūken Tokkyū Burasutā) is the standard sidearm of the core ToQgers. It can change from Uchimasu (ウチマス, Uchimasu Gun Mode) to Kirimasu (キリマス, Kirimasu Sword Mode) Modes by turning the weapon near the grip. The Blaster will announce the name of the Mode it is switching into. The ToQgers are also able to summon and use their ToQ Blasters while untransformed.

On the sides of the weapons on the part that rotates are English letters of "Blaster Mode" and "Blade Mode" of the two modes of the ToQ Blaster.

By flipping the top of the ToQ Blaster in Uchimasu Mode or the bottom of the blade in Kirimasu Mode, Ressha can be placed inside the weapon to boost the effects of the attacks. In ToQger vs. Kyoryuger, the ToQgers use the Zyudenchi loaned to them by the Kyoryugers in lieu of ToQ Ressha to effectively fight the forces of the Deboth Army.

"Now the train is departing!"
―Finisher Atack stand by announcement with Energy Ressha[src]

The Combination Departure Cannon Renketsu Bazooka (合体発車砲レンケツバズーカ, Gattai Hassha Hō Renketsu Bazūka, lit. "Connection Bazooka") is the combination of the core ToQger's personal weapons. It is used by the ToQgers to finish off any monsters the ToQgers face, mainly Shadow Kaijin. The team signature attack with the Renketsu Bazooka is the Rainbow Rush (レインボーラッシュ, Reinbō Rasshu), whose attack is powered by the Energy Ressha (エナジーレッシャー, Enajī Resshā) and its effect reflected in the shooter's imagination. This ability is similar to the power of the Gorenger Hurricane, where an object emerges to defeat a monster associated with it as created by the team. The weapon itself resembles the Go-Ongers' Super Highway Buster.

A variant Rainbow Rush can be performed with ToQ 6gou participating by inserting his Yudo Breaker weapon in place of the Energy Ressha.

TV STORY-Ressha Sentai ToQger Returns: Super ToQ 7gou of Dreams As well as that, the Victory Zyudenchi provided by the Kyoryugers can be used in the Renketsu Bazooka in place of the Energy Ressha, allowing the two Sentai Teams to perform the ToQ Kyoryu Brave Rainbow Rush (トッキュウキョウリュウブレイブレインボーラッシュ, Tokkyū Kyōryū Bureibu Reinbō Rasshu) finisher.

The Rail Slasher (レールスラッシャー, Rēru Surasshā) is the personal weapon accessed through the Red Ressha (defaultly used by ToQ 1gou), resembling a stretch of a railroad track. It can summon a trail of railroad tracks for various purposes, from binding foes with, allowing for easy dispatchment, to a defensive whip to acting like a pseudo-shield to smash all projectiles in front of the wielder. It can even launch other ToQgers forward for high-speed attacks. This weapon can also be accessed by ToQ 1gou's ultimate form, ToQ 1gou of the Rainbow, which allows him to use the combined power of all the ToQgers. In the ToQger Final Live Tour, a black variant of ToQ 1gou named "Yami No 0gou" used this weapon to fight against the ToQgers.

The Home Trigger (ホームトリガー, Hōmu Torigā) is the personal weapon accessed through the Blue Ressha (defaultly used by ToQ 2gou), taking the form of a railway station. The targeting sights-like emblem on the weapon can be fired to paralyze foes, allowing one with overflashy combat moves to safely fire without retaliation.

The Shingou Hammer (シンゴウハンマー, Shingō Hanmā, lit. "Signal Hammer") is the personal weapon accessed through the Yellow Ressha (used by default by ToQ 3gou), with the head of the hammer resembling a signal light. When the blue light on the Hammer is lit, it is charging up energy, and when it flashes to red, it releases all of the stored energy, causing a large shockwave that knocks out anyone in the vicinity of the user.

The Tunnel Ax (トンネルアックス, Ton'neru Akkusu) is the personal weapon accessed through the Green Ressha (defaultly used by ToQ 4gou), with the head of the axe resembling a cut-in-half tunnel. It is also remarkably heavy. Like the Rail Slasher, the Tunnel Ax can emit train tracks, which ToQ 4gou once used against Hanko Shadow.

The Tekkyou Claw (テッキョウクロー, Tekkyō Kurō, lit. "Bridge Claw") is the personal weapon accessed through the Pink Ressha (defaultly used by ToQ 5gou), a bi-claw resembling part of a bridge. With some Imagination power, it can be enlarged, and any anyone that enters the open section would shrink and come out the other side as the size of an ant.

The Yudo Breaker (ユウドウブレーカー, Yūdō Burēkā, lit. "Guidance Breaker") is the personal weapon accessed through the Build Ressha (defaultly used by ToQ 6gou), which is stylized after a light guide stick. If the Drill Ressha is inserted into the Yudo Breaker, it can fire a drill-based energy blast. It can also be inserted into the Renketsu Bazooka and fired as a spiraling projectile in a variant of the Rainbow Rush,

TV STORY-Ressha Sentai ToQger Returns: Super ToQ 7gou of Dreams or accessed by ToQ 1gou's ultimate form, ToQ 1gou of the Rainbow, which allows him to use the combined power of all the ToQgers.

TV STORY-Terminal Station: The Shining Ones

The Last Train Ressha Cannon Daikaiten Cannon (終電烈車砲ダイカイテンキャノン, Shūden Ressha Hō Daikaiten Kyanon, lit. "Great Rotating Cannon")[1] is a cannon themed after a railway turntable, summoned when a ToQger is in Hyper form. Once the Hyper Ressha is inserted into the Cannon, five more Ressha can be placed on the branching railway-like chambers. Once done, the ToQger holding the Daikaiten Cannon pumps the weapon 6 times then locks the Ressha into firing position for the Hyper Five Connection Crash (ハイパー5連結クラッシュ, Haipā Go Renketsu Kurasshu) attack.

During its first usage, with no other Ressha besides the Hyper Ressha inserted into the Cannon, the finishing attack was announced as the Hyper Last Train Crash (ハイパー終電クラッシュ, Haipā Shūden Kurasshu), which fired an Imagination construct of the Hyper Ressha. In a later episode, Akira and Haru used the support ressha version of the 'Hyper Five Connection Crash' with the Drill Ressha replacing the Hyper Ressha in the attack.

The voice of the ToQgers' equipment is provided by Kappei Yamaguchi (山口 勝平, Yamaguchi Kappei), who also voices Ticket as well as providing the narration for ToQger.