The Time Badge was used by Time Force and Time Force Rangers in Season 9. Not only was it a form of identification for each Ranger, but it could cryogenically freeze monsters in time until they were put on trial. Jen Scotts left her own Time Force Badge in the hands of her lover, Wes, the Red Time Force Ranger. He has kept it to this day.

Chrono Blasters were the standard weapon of all Time Force officers, Ranger or not. The Rangers' Chronoblasters (typically) fire Ranger-colorcoded beams. Like the rest of the Time Force Rangers' arsenal, these are stored within the morphers when not in use. 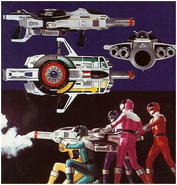 Combination of weapons V1-V5. Uses a clock-like crosshair, it fires incredibly strong energy bolts. Two shots from the blaster is often used as a finishing move for small enemies, normally causing them to subsequently grow.

Double-ended swords used by the Time Force Rangers that are stored in their Chrono Morphers. The Sabers can be wielded as two seperate blades or used in a connected double bladed form. The Chrono Sabers can release blasts of energy when swung. The Sabers can also be charged with energy by the Ranger sliding their fingers along the blade. The energy color will correspond to the Ranger.

An attack commonly used by the Time Force Rangers, excluding Lucas and Katie. The attack consists of the Ranger forming a circle shape with their Chrono Sabers while in the air, which will cause an image of a clock to appear behind them before swinging their Sabers for a devastating attack.

Developed by Trip, the Electro Booster combines with the Chrono Saber and fires powerful energy shots. It was first used in Uniquely Trip to defeat a monster that could absorb energy. It has a mode where the energy can be inverted, so normal energy absorption would not work. Even though it can be used by any of the Core Time Force Rangers, it's mostly used by Wes, sometimes by Trip. It's notable as being the only piece of the Rangers' arsenal to be confirmed as destroyed towards the end of the series.

This is the personal weapon of the Quantum Ranger. It has a blaster mode, and a blade mode. The Quantum Ranger uses the blade to deliver the Freeze Strike finishing move. Wes Collins, while possessing the Quantum Morpher, was able to use this weapon as the Red Ranger to destroy Cyclobots and to neutralize the Q-Rex's power crystal. 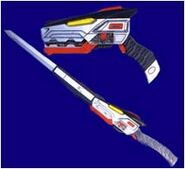 The Battle Warrior Armor is used by Wesley Collins (Red Time Force Ranger) to turn him into the Red Battle Warrior. In the episode "Beware the Knight", the Time Force Rangers came face to face with a black knight who wanted to open a sealed box that held the Battlizer's power. However, only one "pure of heart" could open it, so, when Wes managed to obtain the box from the dragon guarding it, he received the Battlizer.

Since humans are unable to withstand the rigors of time travel, Time Force created time ships, the only type of vessel capable of safely transporting humans through time (apart from the vessels usable only by Time Force Power Rangers). There was only one time ship in existence at the season's start, and according to Katie it was untested; this ship was used by the Time Force Rangers to travel to 2001, and was destroyed shortly afterwards due to their poor piloting. This prevented Time Force from either recalling the Rangers or sending reinforcements to aid them, though any weapons meant for the Rangers that can travel through time on their own were still able to reach them.

It took half of the season for another one to be constructed, by which time the rangers had grown skilled enough that sending back reinforcements was considered unnecessary. Alex used this time ship to travel back and briefly regain control of the team, but ultimately relinquished his position to Wes and returned to the future. The time ship was sent back once more in the three-part season finale to allow the Time Force Rangers (minus Wes) to return home and avoid the predicted destruction in the final battle. Wes forced his four teammates to make the trip, but they soon returned using the Time Force Megazord to aid him against Ransik, Frax, and Doomtron. Upon capturing Ransik and Nadira, they returned to the future once more using the time ship, but allowed Wes and Eric to keep their morphers.

The time ship is seen once more in Reinforcements from the Future, Pt. 2, as the method used by the four rangers, Ransik, Nadira, and Circuit to come to the year 2002 and fight against the Mut-Orgs.

Time ships are launched through the time gate by the Transwarp Megazord.

The Time Jet is a glider-like aircraft that carries the Time Force Rangers to their Time Fliers. It can fire from front-mounted blasters and transform into an over-sized handgun. In its handgun mode, it is often used by the Time Force Megazord Mode Blue. In "The Time Shadow", the Time Jet, apparently flying on its own, manages to cryo freeze Izout with its regular lasers after the Time Force Megazord is taken down. In "Circuit Unsure," the Rangers use the Time Jet to attack the enlarged Serpicon in lieu of the Megazord after Circuit is damaged and cannot call for help. The Time Jet successfully disarms Serpicon, enabling the Quantasaurus Rex to freeze him.

The TF Eagle (The Time Force Eagle) was the Quantum Ranger's main vehicle for transportation. Like many vehicles seen in Time Force it had the ability to fly, and travel through time. It was used to travel into the past in "Clash for Control" to get the Quantasaurus Rex and later in "The End of Time" to escape the exploding Clock Tower.

The Strata Cycle first appeared in Undercover Rangers (Episode 31), when the Time Force Rangers fought against Frax and his custom-made monster Mr. Mechanau. Since Alex himself could not go, and in order to best protect Jen, he sent the Strata Cycle to Wes granting him enough power to defeat him. It was a strong hovercraft, with the ability to fire V-Weapon level lasers at enemies in addition to the ability of supersonic flight.